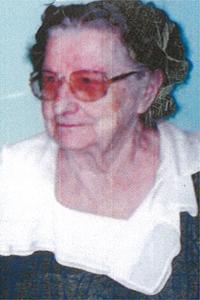 1921 ~ 2014
Mrs. Rose Aitken of Lethbridge, beloved wife of the late Mr. Earl Cameron Aitken passed away peacefully at the Chinook Regional Hospital on Thursday, February 6, 2014 at the age of 92 years. Rose was born December 26, 1921 to John & Mary Chorm in Seech, Manitoba. She attended the Oakburn School in Brandon, Manitoba. Rose was a devoted and loving wife, mother and homemaker. Rose enjoyed spending time in her garden caring for her flowers and had a keen interest in all kinds and species of birds. She had a special gift for needlework, knitting and crocheting. She will be deeply missed. Rose is survived by her daughters Margaret Aitken, Beverly (Gorden) Cargill, Shirley (William) Barnowich, Judy (Jim) May, Connie Koncz and Michele (Lyle) Taylor; her grandchildren Angela Cable, Greg Cable, Warren Cargill, Wesley (Kari) Cargill, Jeanette (Mike) Phelan, Jon Barnowich, Jeremey May and Jenny May as well as numerous great-grandchildren. Besides her loving husband Earl, Rose was predeceased by her parents; her parents in law William & Eliza Aitken; daughter Cecelia Aitken; brothers Pete, Mike and Bill Chorm; sisters Lena Sherb, Annie Ferby, Nellie Poole, and Stella Chorm; 2 infant daughters; 1 infant son and her grandchild Lisa Maria Cable. Family and friends are invited to pay their final respects between 6:00pm and 8:00pm on Wednesday, February 12, 2014 at MARTIN BROTHERS FUNERAL CHAPELS, 610- 4 Street South, Lethbridge, AB. A Funeral Service will be held at 2:00pm on Thursday, February 13, 2014 at MARTIN BROTHERS RIVERVIEW CHAPEL, 610-4 Street South. Interment to follow in the Mountain View Cemetery. Send condolences at www.mbfunerals.com.