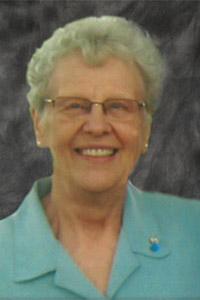 It is with deep sadness that we announce the sudden passing of Helen Boettcher, Monday, February 11, 2014 at the age of 82 years. Helen was born at the Alexander Galt Hospital in Lethbridge, and graduated from LCI. Helen attended the University of Calgary and graduated with a Certificate in Teaching, and later taught school in Burdett, AB. Helen then moved to Calgary where she began her career in banking at The Dominion Bank. She married Roger Boettcher in 1961 in Sandpoint, Idaho, following that they moved to Edmonton where they started their family, later returning to Lethbridge. After Roger’s passing in 1969, Helen returned to work in the banking field at CIBC. Prior to retirement, she enjoyed working for a number of years at The Bay. Helen was a dedicated member of the First United Church since the 60’s, and in her later years enjoyed singing in the church choir. She was also well known for attending and volunteering at the Lethbridge Senior Centre. During her retirement years, she took great pleasure traveling extensively with her sister Margaret and brother-in-law Stan. Helen was a devoted mother, grandmother, sister and friend. Her family was always the most important thing in her life. She lived for her children and grandchildren and leaves a lifetime of memories. She will be greatly missed by her son Gordon, daughter Brenda (Bruce), grandson Kyle, granddaughters Olivia and Ella, sister Margaret, sisters-in-law Bev (Don), Dale (Tony), and Verna, numerous nieces and nephews, as well as countless friends. Helen was predeceased by her daughter Yvonne in 2011. A Celebration of Life will be held at the FIRST UNITED CHURCH, 502-13th Street North, Lethbridge, AB. on Friday, February 14, 2014 at 1:00 P.M. with Reverend Brenda Kersell officiating. In lieu of flowers, donations in memory of Helen may be made to S.T.A.R.S., 1441 — Aviation Park N.E., Box 570 Calgary, Alberta T2E 8M7.