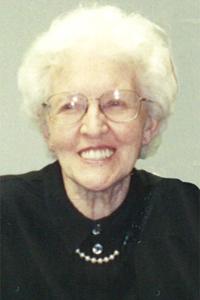 OCTOBER 29, 1921 ~ FEBRUARY 10, 2014
On February 10, 2014 Nancy Christina Rutt, our much-loved Mum, Grandma, and Great-grandma, left us to join her beloved Byron. As she had wished, Mum died at home, surrounded by her family. Nancy is survived by her four children: Daughter Janet of Lethbridge. Son Eric (Faith) of Lethbridge; their daughter Suelynn Kemp (and her sons Cole, Codey and Cayden) of Mansfield, England; their daughter Sonia (Chris) Stock of Lethbridge; and their son Byron of Surrey, B.C. Daughter Diana (Ken) Misik of Grande Prairie; their sons Chris of Lethbridge and Warren of Olds. Son Brian (Shirley) of Welling. She is also survived by her sister Freda Dahl of Brooks; her children Sheila, Brenda (John) and Tim (Donna); and their children and grandchildren. Also surviving are her late brother Desmond’s children Abby (Dan), Penny and Robin (Theresa) and their children, all of California. Nancy also leaves cousins; relatives in Norway, England and Australia; and Byron’s family: nephew Mark Eliot of Lethbridge; and relatives in the U.S. Besides her loving husband Byron, Mum was predeceased by her parents Elmer & Nellie Olsen; her half-brother Morris Olsen and his wife; her brother Desmond Arthur and his ex-wife Nancy Short; her brother-in-law Jim Dahl; her in-laws Stewart & Gladys Rutt; and her sister-in-law Gloria Eliot. Nancy was born on the family farm outside Hanna, AB, the oldest of three children, and attended school in Hanna. In 1939 she went to Calgary to finish her Grade XII; while working in a greenhouse there, she developed her life-long love of houseplants and gardening. When World War II broke out, she enlisted in the RCAF and was posted in Trenton, ON as a Hospital Assistant. There she met Byron, the love of her life, an Alberta farm boy who was a Flight Engineer in the RCAF. After the war, they attended the University of BC, Byron in pre-dentistry, and Nancy in nursing. They married in 1947and returned to the Rutt family farm outside Coaldale where they raised their four children. At the age of 47, Mum enrolled in the first two-year RN class at the Lethbridge Junior College, graduating at the top of her class and finally fulfilling her life-long dream of being a nurse. She worked at the Southland Nursing Home for two years. In 1995, with Mum becoming more disabled by osteoarthritis, they retired and moved into Lethbridge. Mum was a committed volunteer all her life, until arthritis and macular degeneration totally disabled her. She and Byron kept a large garden and yard on the farm and smaller ones in Lethbridge. For years, she had hundreds of house plants. She was Akela in a Cub Pack, President of the Taber Lioness Club, a Life Member of the Girl Guides, and a Life Member of the Pythian Sisters. She and Byron travelled extensively in their RVs, frequented auction sales, exhibited Byron’s 1927 White truck all over Canada and the U.S as members of the Antique Truck Club, and attended Lions conventions worldwide. Mum was very sweet-tempered, rarely complaining despite years of illness and increasing disability. She had an amazing green thumb and was a great cook. She read voraciously using her CNIB magnifier. At Mum’s request there will be no formal funeral service. We will have a Remembrance afternoon at her home, 15 Simon Fraser Blvd. West, Lethbridge on Sunday February 16, 2014 from 1:00pm- 5:00pm. In lieu of flowers, please donate to one of Mum’s favorite charities: The Arthritis Society, 393 University Ave, Suite 1700 Toronto, Ontario M5G 1E6; The Heart and Stroke Foundation of Alberta 200, 119-14 Street S.W. Calgary, Alberta T2N 1Z6; or the Stars Foundation, 1441 Aviation Park N.E. Box 570, Calgary, Alberta T2E 8M7. Send condolences at www.mbfunerals.com.