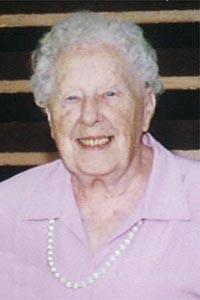 1920 ~ 2014
Gladys Elizabeth Clay of Lethbridge, beloved wife of the late Don Clay, passed away peacefully on February 14, 2014 at the age of 93 years. She is survived by her sons Larry of Regina, SK and Dale (Linda) of Nepean, ON; four grandchildren Sharon (Bill), Monica (Farrell), Adam and Amanda as well as three great-grandchildren (Madelyn, Isabelle and Roniin). She was predeceased by her husband, Don, her parents Oscar and Alice Willetts and her sister Mabel North. As a child, Gladys lived on a farm outside of Lethbridge and attended a one room school at Crystal Lake. Her parents were actively involved in the community hosting many musical evenings and card parties at their home. Gladys was taught to play the piano at age four and this began for her a lifetime of joy of music. Her sister, Mabel, was her constant companion until age 14 when she moved to Lethbridge to live with her Grandma in order to attend high school at the Lethbridge Collegiate Institute. Gladys married Don Clay on November 17, 1945. From the start, Gladys and her husband were partners. They work hand-in-hand to build their home in north Lethbridge. They loved to entertain family and friends. It was not uncommon for them to have more than twenty people for supper and cards. Throughout their 63 years of marriage, they preferred to do things together rather than apart. Faith in Christ was important for Gladys and she was a life member of St. Mary’s Anglican Church in north Lethbridge. Her Christian faith sharpened her awareness of the needs of others and she was always quick to give a helping hand of support, a word of encouragement or provide a listening ear. Gladys was very proud of her sons and their spouses as well as her four grandchildren and most recently three great-grandchildren. To them, she stressed the importance of higher education, the need for a strong work ethic, the advantage of being a team player and the importance of being loyal to family, friends and community. For the last eight years, Gladys resided at Good Samaritans Park Meadows, where she was much loved by fellow residents and staff alike. She was known for her quick sense of humor, her love of playing cards, and her non -complaining nature. A Memorial Service will be held at 1:30pm on Friday, February 21, 2014 at MARTIN BROTHERS RIVERVIEW CHAPEL, 610, 4th Street South, Lethbridge, with Canon James Robinson officiating. In lieu of flowers, memorial donations may be made to the Good Samaritan’s- Park Meadows Village, 1511, 15th Avenue North, Lethbridge, AB T1H 1W2. Send condolences at www.mbfunerals.com.

No Condolences for “CLAY Gladys”