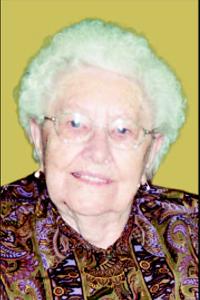 1920 – 2014
Theresa Skorya, beloved wife of the late John Skorya, passed away in Taber on Friday, February 21, 2014 at the age of 94 years. Relatives and friends are invited to Prayers at Southland Funeral Chapel, 5006 – 48 Avenue, Taber on Wednesday, February 26, 2014 at 5:00 P.M. The Funeral Mass will be celebrated at St. Augustine’s Catholic Church, 5009 – 48 Avenue, Taber on Thursday, February 27, 2014 at 11:00 A.M. with Reverend Vincent TuanHa, Celebrant. Burial to follow at the Taber Memorial Garden. Condolences may be forwarded by visiting our website at www.southlandfuneral.com. Theresa is survived by her son Frank (Janet) Kichler of Taber; step daughter Virginia (Frank) Badura of Lethbridge; grandchildren Patrick (Darla) Kichler, Stephen Kichler (Rebecca), Tom (Pam) Badura, Agnes Guminy, Ken Badura, Marilyn Badura (Tony), Keith (Tammy) Badura and Shirley Badura; sixteen great grandchildren and four great great grandchildren. She is also survived by her sister Regina Killinger as well as numerous nieces and nephews. She was predeceased by her husband John Skorya, first husband Joseph Kichler, mother Maria Merkl, brother Frank Merkl and brother-in-law Frank Killinger. Theresa was born January 6, 1920 in Socolovac, Yugoslavia. She immigrated to Canada in 1949 with her nine year old son Frank. They moved to Taber and this is where she resided for the rest of her life. Theresa was a hard worker, at first in the sugar beet fields and later at the hospital in laundry and housekeeping. She was a great cook and loved to bake. Theresa also had a big garden and wonderful flowers. When she did relax, she had her crochet work in her hands. Theresa will be lovingly remembered by her family and friends. If friends so desire, memorial tributes in Theresa’s name may be made directly to a charity of one’s choice. Arrangements in care of Southland Funeral Chapel, Taber. Telephone: (403) 223-8778.