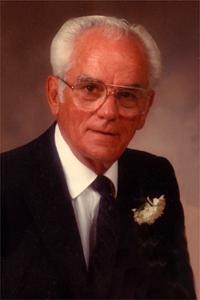 DR. ROY. E. ANDERSON passed away February 22, 2014 in Lethbridge at the age of 91. He is the loving father of three daughters: Gail Sherlock of Calgary, Pam Anderson of Lethbridge and Deb (Rob) Cornelssen of Cochrane. He has five grandchildren: Mark and Lisa Sherlock, Jamie (Derek) Williamson, Taryn Cornelssen and Mike Anderson; two great grandchildren Ben and Adelyn Williamson. Roy was predeceased by his beloved wife, Doris, his brother, Dr. Howard Anderson and his son-in-law, Rolf Sherlock. Roy was born in Berry Creek, Alberta, on December 17, 1922. He attended Normal School in Calgary where he earned his teaching certificate and proceeded to teach in a one-room schoolhouse. His teaching career was cut short by his acceptance into the Army when he was chosen out of a select few to attend the University of Toronto in the Engineering program. Roy achieved the rank of Lieutenant through his Officer Training. While serving, he met the love of his life Doris Price at the Army base in Camp Borden where she was a Red Cross volunteer. They were married on August 23, 1947 in Toronto and spent 59 years together as soul mates. After the war, Roy attended and graduated from the Chiropractic College in Toronto. He initially practiced in Taber and then formed the Chiropractic Associate Clinic in Lethbridge in partnership with Dr. Jim Speelman; they both retired in 1997. Roy had a great love for people, a very calming nature and a positive philosophy about life. He was a dedicated family man and cared greatly about the well being of his patients, friends and family. Roy enjoyed all sports, especially a good golf game. He was well known for his wonderful sense of humour. Thanks, Dad for the love and the laughter. We are really going to miss you. The family will be having a private celebration of his life. In lieu of flowers, we respectfully request donations be made to the Windy City Canine Rescue (www.windycityrescue.com) or Last Chance Cat Ranch.

No Condolences for “ANDERSON Roy”