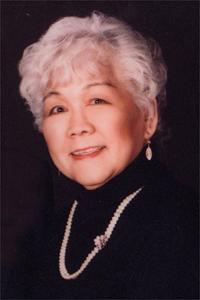 CHIEKO LOUISE NISHIYAMA, beloved wife of the late Jack Noboru Nishiyama, passed away at the age of 89, in Raymond on Monday, February 24, 2014. Louise was the cherished mother of Jackie (and Barrie) Robb of Calgary, Rod Nishiyama (and Lisa Zobell) of Calgary, and Brian Nishiyama of Raymond. She was the proud grandmother of Ryan (and Astrid) Robb of Calgary, Brett Robb of Boston, B. Scott Robb of Edmonton, Matthew and Christopher Nishiyama of Calgary; and great-grandmother to Noah and Logan Robb, Liam and Brosnan Fair, Sheldon Robb and Jaina Nishiyama. Louise is also survived by her sister, Ayako Kaye Otsuka. She was predeceased by her brother, Mitsuo Amemori, and her sisters, Kinko Hironaka, Tomiko Imakire, and Akiko Moriyama. Louise was born in Mission, BC on December 11, 1924. A brilliant student, she was uprooted at the end of her 12th year of school by the relocation of the Japanese Canadians during the Second World War. In 1942, to keep the family together, her father brought them to work in the beet fields of Raymond. After a short time working as a domestic, she was chosen by Dr. Harris Walker to train as a nurse. Subsequently, she worked for several years at the Raymond Medical Clinic as a receptionist, nurse and book-keeper. She went on to accounting positions at other firms, retiring from Mountain Minerals in Lethbridge. In 1946, the Nishiyama family was reunited in Raymond, bringing Jack into her life. They were married in December 1948. Both were very active in their Church community as well as the greater Raymond community, especially working with groups of young people. Louise helped found a Girl Guide troop in the early 60’s. She and Jack became avid and talented ballroom dancers, and with their very good friends, the Sunadas and the Takahashis, they dined and danced in Lethbridge and Calgary. As a group, the six forever-friends enjoyed many birthday celebrations and fun-filled Hawaiian vacations together. Louise was an avid golfer and, with her friends Alice Kamitomo, and Judy Fukushima represented Alberta in a national Seniors Women’s competition. She was a founding member of the Momiji Dance Troupe in Lethbridge, and after retirement, taught several sushi-making classes for the Town of Raymond. A beautiful, accomplished woman, noted for her sense of style, she also enjoyed modeling for a Lethbridge agency. Thank you to the staff at the Ridgeview Lodge and the Prairie Lodge in Raymond for their patience, kindness and caring during Louise’s stay in both facilities. A Visitation will be held on Friday, February 28, 2014 from 7:00 — 8:00 pm at CHRISTENSEN SALMON GENERATIONS FUNERAL HOME, 703 — 13 St. North, Lethbridge. A Memorial Service will be held at the BUDDHIST TEMPLE OF SOUTHERN ALBERTA, 470 — 40 St. South, Lethbridge on Saturday, March 1, 2014 at 2:00 pm. Reverend Y. Izumi will officiate. Memorial donations to the Heart and Stroke Foundation would be gratefully acknowledged/accepted.

No Condolences for “NISHIYAMA Chieko”