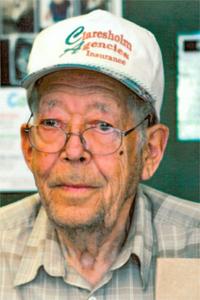 September 15, 1926 — February 25, 2014
Jim Thorstenson, beloved husband of 62 years of Doris, passed away on February 25, 2014 in Claresholm at the age of 87. He will be greatly missed by his children Penny (David) Gill and Barry Thorstenson; his granddaughters Kimberly Gill, Kristen (Dan) Butler and Baylee (Mike) Leavitt. Jim was predeceased by his mother Bertha and sister Lucille. Jim was an active member of the Claresholm Lion’s Club and also enjoyed curling, golf and gardening. The family would like to thank the Homecare staff, Claresholm General Hospital nursing staff and doctors for their tender care during Jim’s last days. A memorial service will be held at Leyden’s Funeral Home (4079 1st Street West) in Claresholm on Saturday, March 1, 2014 at 1:00 pm. with Pastor Stefan Ulrich presiding. In lieu of flowers, donations in Jim’s memory if desired may be made to the Claresholm & District Health Foundation (Box 2638 Claresholm, Alberta T0L 0T0) or the Claresholm General Hospital Palliative Care (Box 610 Claresholm, Alberta T0L 0T0).