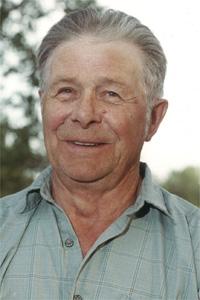 1927 ~ 2014
It is with deep sadness that we announce that Peter Baier passed away peacefully on March 5, 2014 at the Cedar Creek Lodge in Lethbridge at the age of 86. Those left to cherish his memories are Irmina Baier, his loving wife and lifelong friend of 62 years, his four children, Johanna (Norman), Hans (Shelley), Rosemarie (Barry Allen), Norbert (Holly), his six special grandchildren, Katherine, Shayla, Jeffrey, Denae (Brody), Kevin (Mariah), and Caitlin (Brandon). He also leaves behind a sister in Germany, Anna Fichter, brother -in-law, John (Elizabeth) Vogel, numerous nieces and nephews. Peter was predeceased by his parents in Russia, his sister Stephanie, and brother-in-law George Fichter in Germany. Peter was born December 16, 1927, in Kamenka (a German province in Russia). He married Irmina in November, 1951 in Germany and immigrated to Canada in April 1953. The family initially resided in Turin, then retired in Lethbridge. Vigil Rites will be held at 7:00pm, on Monday, March 10, 2014, at MARTIN BROTHERS RIVERVIEW CHAPEL, 610 4th Street South, Lethbridge AB. A Funeral Mass will be celebrated at 11:00am, Tuesday, March 11, 2014 at ST. BASIL’S ROMAN CATHOLIC CHURCH. 604 13th Street North, Lethbridge, AB, with Father Nathan Siray, celebrant. Cremation has been entrusted to Martin Brothers following the service. Flowers are gratefully declined. Those who wish, memorial donations may be made to the Heart & Stroke Foundation of Alberta, Box 2211, Lethbridge, AB T1J 4K7. Send condolences at www.mbfunerals.com.