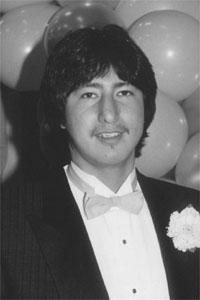 MICHAEL KENDALL MOUNTAIN HORSE of the Blood Reserve, passed away suddenly on March 1st, 2014 at the age of 44 years. Michael was born on July 13th, 1969 to Sybil Shirley Mountain Horse and the late Charles Reid Singer. Michael leaves to mourn his special companion Roana “Darcy” Weasel Head; his beautiful daughters: Tiffany (Casey) Weasel Head, Mikayla Weasel Moccasin, and his baby girl Shay-Lynn Mountain Horse; his twin sons: Michael Jr. Roan and Bradley Mountain Horse; his precious grand babies: George and Lexus; special mother in law Gloria Weasel Head. Michael was a calm, cool and collected kind of a guy. He had a special place in his heart for each person he met. He was very athletic and enjoyed his “rock picking”. He loved his family very much and before his passing, he kept in close contact with his children and was always there when they needed him. Michael “Mike” will forever live in his children and grandchildren. A Wake Service will be held at the Senator Gladstone Hall, Blood Reserve on Friday, March 7th, 2014 from 7:00 p.m. continuing all night. The Funeral Service will be held at the Senator Gladstone Hall on Saturday, March 8th, 2014 at 11:00 a.m. Interment in the St. Catherine’s Cemetery, Blood Reserve. Email condolences to: legacyfh@telus.net Arrangements entrusted to Berry Gorham.