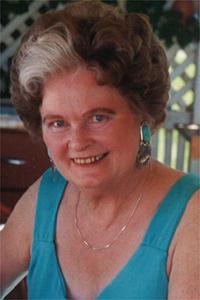 1924 ~ 2014
Mrs. Agnes “Eileen” Scheurman of Lethbridge, beloved wife of the late Mr. Henry “Hank” Scheurman, passed away at St. Michael’s Health Care Centre on Monday, March 3, 2014 at the age of 89 years. Eileen was born on September 17, 1924 in Dominion City, Manitoba to John and Emily Walters. She moved to Calgary in her late teens where she met Hank and they were married on July 15, 1947 to months after they met. Their two sons, Donald and Gordon, were born in Calgary and the family moved to Lethbridge in 1952. Eileen was well known in Lethbridge for her career in ladies fashions. She worked for many years as manager of McArthur’s Ladies Wear and Faye’s Apparel. Eileen was a very talented seamstress, designing most of her own wardrobe. She enjoyed gardening, pickling, canning, fishing and spending time at their property at Lee Lake with her family and friends. Eileen is survived by her sons Donald (Judy) Scheurman and Gordon (Louise) Scheurman; grandchildren Brad (Judy) Scheurman, Cara (Matthew) Ball, Krista (Derek) Descoteau, Jamie (Bryan) Eklund, and Kimberley Scheurman; great-grandchildren Hailey, Chase, Liam, Sadie, Ruby, Owen, Jacob, Dawsen, and Daiya and numerous nieces, nephews and their families. A special thank you to the staff of St. Michael’s for creating such a warm, loving home for Eileen. A Memorial Service will be held at 2:00pm on Saturday, March 15, 2014 at MARTIN BROTHERS RIVERVIEW CHAPEL, 610 4th Street South, Lethbridge, AB with Reverend Glenda Wert, officiating. Send condolences at www.mbfunerals.com.