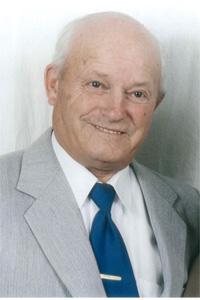 LEWIS WALTER "LOUIE" ARMSWORTHY our beloved husband, father and grandfather passed away at the Cardston Hospital on March 13, 2014. Lewis was born in Aylesbury, Saskatchewan on July 5, 1930 and was the eldest son of Isabella and Covert Armsworthy. He was named after Isabella’s brother Walter Fender who was living in Scotland at the time. Lewis met and fell in love with Erva Mae (Low) and married May 2, 1956 in Cardston and was happily married for 57 years. Lewis farmed and ranched in Southern Alberta for 20 years and then worked for the MD of Cardston for another 25 years eventually retiring there. He loved the land, working with animals and spent many hours helping those who knew him. Lewis was a member of the Cardston Legion participating as part of the honor guard for veterans, funerals and Remembrance Day commemorations. He loved hockey and baseball playing for many years with several community men’s teams. Lewis will be remembered for his welcoming, warm smile, big hugs and hearty handshakes and always a kind word spoken and service rendered. He loved people and not a day went by without finding an opportunity to help someone in need wherever he went. Lewis is pre-deceased by his parents Isabella (Fender) and Covert Armsworthy and a grandson Christopher William Shing (1991). He is survived by his loving wife Erva Mae (Low), son Walter (Colette) Armsworthy, daughters Debbie (Lance) Olson and Audrey (Randy) Shing, 9 grandchildren and 12 great-grandchildren. The family would like to thank the doctors and nurses at the Cardston Hospital and Lee Crest for the care and help received especially in the past few weeks and months. The Funeral Service will be held Monday, March 17, 2014 at 11am at the Cardston Alberta Stake Centre, 338 5th Ave. E. with Bishop Walter Armsworthy officiating. Friends may meet the family prior to the service from 10-10:45am at the Cardston East Stake Center. Interment in the Cardston Cemetery. Email your condolences to: legacyfh@telus.net. Funeral arrangements entrusted to Barry Salmon of Legacy. In lieu of flowers, donations can be made to the Canadian Kidney Foundation, #408, 740 4th Ave. South, Lethbridge, AB T1J 0N9.