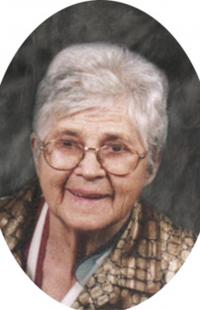 June 8, 1919 – March 17, 2014
It is with great sadness and love that we say goodbye to our mother, grandmother and great-grandmother who passed away at Extendicare at the age of 94 years. Frances will be sadly missed by her children Sharon (Allan) Neville, Phil Coe Jr., Barbara (Allan) Bayne and Laurel (Lyle) Saskowski, grandchildren Scot (Marcie), Lee (Rochelle), Patrik (Kathy), Christopher, Robyn (Jeff), Curtis (Darcy), Andrea (Dan), Christopher (Stevie), Heather, and her great-grandchildren Simon, Emily, Samuel, Journey, Hudson, Tyson, Kyla, Alanna, Roan, Fenn, Elis, Chloe and Sophie. She was predeceased by her husband Phil in 1988 and daughter-in-law Sonja in 2013. Frances taught school in Saskatchewan and later in Benito and Thompson, Manitoba. She moved to Lethbridge after living in Costa Rica for six years. Frances was an active volunteer at the Galt Museum, Salvation Army and Bibles For Missions. She was passionate about books and diligently organized the LSCO Library and later, the books at Garden View Lodge. Frances was a member of St. Mary The Virgin Anglican Church and later St. Augustine’s, Canadian Federation of University Women, Council of Canadians and a Life Member of The Nord-Bridge Seniors Centre. She was a staunch NDP supporter and her favourite charities were directed to animal welfare and environmental concerns. Frances was an avid collector of anything to do with Charles Dickens and some of her collection was proudly displayed at the Public Library with most being donated to the University of Lethbridge. The family would like to thank Dr. E. Hardin, Jo Nay of the Lethbridge Health Unit and the Staff at Extendicare for their kindness and caring. We will miss you mom but you leave behind a lifetime of memories that will live on in your children, grandchildren and great-grandchildren. Cremation has taken place and Interment in Steinbach, Manitoba will be held at a later date. Flowers are respectfully declined. In lieu of flowers, your time would be appreciated attending and enjoying your local library.