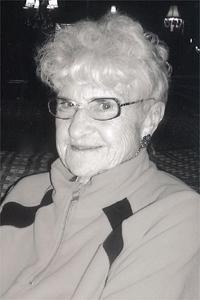 1919 ~ 2014
Mary passed away on March 30, 2014, fiercely independent until the very end. She had emigrated from Germany with her husband, Stan, and baby daughter in the early 1950’s. Life was hard but surviving the war in Europe had developed in her a will and inner strength of steel. Even more important was a staggering religious faith which remained unshakeable. Believing all work useful she would take many varieties of jobs, despite having a teaching certification from her native Russia. Throughout her life she had a passion for eye catching clothes, her vegetable garden, her church, and later on, of course, her grandchildren. They, in turn, were endlessly amused by her storytelling presented in a thick Russian accent accompanied by appropriate facial expressions. Never did she forget a birthday or celebration and each card would have a Kit Kat tucked in it. She will always be in the hearts of Anna, Ted and Alexandra, Catherine, Matthew and Gregory, and a slight whisper in the memory of Madelyn. Many thanks to Lena, Ruth, Elaine and Margaret for their support over the years and thank you to all the compassionate staff at the Chinook Regional Hospital. A Funeral Service will be celebrated at 10:00 am on Thursday, April 3, 2014 at ASSUMPTION OF THE HOLY VIRGIN RUSSIAN ORTHODOX CHURCH, 907 — 9th Avenue North, Lethbridge with Father Antonie Ciobanu, celebrant. An interment will take place at Mountain View Cemetery. Send condolences at www.mbfunerals.com.