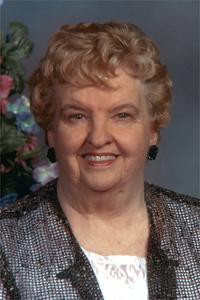 1930 ~ 2014
Dora Joan Boisson of Lethbridge, beloved wife of the late Marcel J. Boisson, passed away peacefully on Thursday, March 20, 2014 at the age of 83 years. Dora was born November 25, 1930, 2nd daughter of Anne and Conrad Simpso. She was raised on the family farm near Weldon, Saskatchewan. In 1946, she married Marcel Boisson and together they raised 5 children Valerie, Warren, Vaughn, Gene and Wanda. During their 54 year marriage they had many endeavors including farming and running their cigar stores. In later life, Dora enjoyed the cabin at Lee Lake and the 5th Wheel she and Marcel took across Canada. After Marcel’s passing in 2001, Dora kept herself busy with swimming, lunches with friends, and bus trips to casinos in Lethbridge and Calgary. She will be deeply missed by all those who loved her. Dora is survived by her two daughters Valerie (Howard) Logan and Wanda (James) Miles; her three sons Warren (Eddra) Boisson, Vaughn (Sheila) Boisson, and Gene (Nancy) Boisson; her grandchildren Kyle (Lily) Crowe, Trina (Jeremy) Anderson, Merrilee (Noel) Reid, Corby (Kelcie) Urban, Shawn (Tara) Boisson, Marc Boisson, Becca (David) Pritchard, Nicole (Chris) Oliver, Brian Boisson, Jessica (Trio) Mulli, and Troy Boisson; 19 great-grandchildren and 1 great-great-grandson; and one sister Genevieve (Allan) Anderson. Besides her loving husband Marcel Boisson, she was predeceased by her parents Anne and Conrad Simpso and an infant daughter. A Celebration of Life will be held at 2:30pm on Saturday, April 12, 2014 at the LUTHERAN CHURCH OF THE GOOD SHEPHERD, 2406- 11 Avenue South, Lethbridge with Pastor Thomas Peterson, officiating. In lieu of flowers, memorial donations may be made to the St. Michael’s Palliative Care, 1400- 9th Avenue South, Lethbridge, AB T1J 4V5. Send condolences at www.mbfunerals.com.