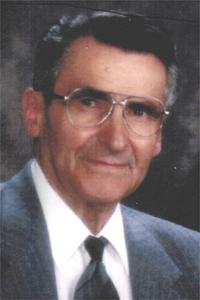 1924 ~ 2014
John William Bair of Lethbridge beloved husband of the late Donna Bair, passed away peacefully at Edith Cavell Care Center on April 8th, 2014, three weeks shy of his 90th birthday. John is survived by his 2 daughters Gayla (Stewart) Gilborn and Neva (Robert) McNab, grandchildren LaRae (Wayne) Murphy, Jeff (Savannah) McNab, Ashleigh McNab and Karen Gilborn and eight great grandchildren, Kasey, Leah, Brett, Madison, Shelby, Johnny, Sira and Jacob. Dad was predeceased by his wife Donna, parents Leland and Ella Mae Bair, brothers Alva and Teddy (in infancy) sisters Marjorie, Irene, Lena and grandson Layne Gilborn. Dad married Donna Lind in 1946. He farmed east of Milk River with his brother Alva and later his nephew Ron. The Bair brothers were known for being the farmers who seeded first in the spring and harvested first in the fall. During his years in Milk River, Dad became very involved with the community. He was a member of the Elks and a volunteer firefighter and ambulance driver. Mom and Dad lived in Milk River until 1970 when they moved to Lethbridge. He remained active on the farm until he sold it in 1990. Dad lead a full active life with many hobbies including hunting, fishing and exploring the Milk River back country. He was an excellent marksman, having twice won the Canadian Gold Shield for small bore accuracy. He continued his shooting expertise as a member of the Lethbridge Black Power Club where he won many awards including Frontiersman of the Year. He was also proficient with his Hawk and Knife. Dad was a talented craftsman; for years he frequented craft sales in Alberta and BC where his deer and log drawers were always popular items. Not many homes in this area are without at least one of John’s deer! Playing cards was a pastime Dad greatly enjoyed right up to the end of his life. Our Sunday get-togethers always began with a hotly contested game of Canasta. He loved cribbage, especially when he beat his nephew Reed Spencer. Dad loved his family unconditionally and made friends wherever he went. He was likely the kindest man you would ever meet and never had a bad word to say about anyone or anything. At Dad’s request there will be no formal funeral. A private interment will be held at Archmount Cemetery. In lieu of flowers a donation to the Heart and Stroke Foundation, Box 2211 Lethbridge, AB T1J 4K7, would be appreciated. Rest in Peace Dad. Send condolences at www.mbfunerals.com.