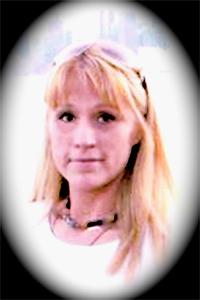 (1965-2014)
It is with great sorrow that we announce the passing of Amber Jean Van Loon, former resident of Bellevue, Alberta who recently resided in North Vancouver, BC, who was called to be with the Lord on April 4, 2014 in North Vancouver. She celebrated her 48 years of a full life. She is survived by her loving son, Colin Van Loon Lyttle of Vancouver, BC; her brothers, George (Randy) Van Loon of Claresholm, Lee (Theresa) Van Loon of Bellevue, William Van Loon of Red Deer; and her sisters, Mary (Brad) Harris of Lethbridge and Doris Van Loon of Bellevue. The Funeral Service will be held on Thursday, April 17, 2014 at 1:00 pm at Fantin’s Funeral Chapel in Blairmore (13461-20th Avenue) with family member Pastor Manfred North Peigan officiating. The Visitation Ceremony will be conducted on Wednesday, April 16, 2014 at 7:00 pm. Donations in memory of the late Amber Van Loon will be gratefully accepted by the Canadian Addisons Society (193 Elgin Avenue West Goderich, Ontario N7A 2E7) or to the ASPCA (P.O. BOX 725, Blairmore, AB). Condolences may be registered at www.fantinsfuneralchapel.ca. Fantin’s Funeral Chapel entrusted with arrangements (877) 896-8555.