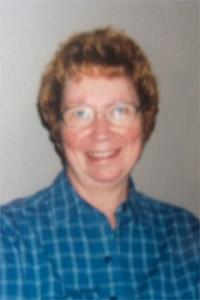 1936 ~ 2014
Mrs. Freda Alice Canavan of Foremost, Alberta passed away suddenly on May 5th, 2014 at the age of 77 years. Freda was born September 21st, 1936 in Lethbridge. She was the youngest of four children and was raised on a farm south of Foremost. She attended school in Foremost and after graduating worked as a teller at the Royal Bank. She met Ronald Canavan in 1960 and they were married on June 24th, 1961. Soon after they were married they moved to Pendant D\’Oreille gas camp. Freda and Ron enjoyed travelling in their motorhome with their two boys, Gordon and Kenneth, prior to Ron\’s passing in 1983. Freda enjoyed gardening and often began feeding stray animals in her back yard like rabbits and cats. She was the type of person who would not even kill a bug. If there was a bug or spider in her house, she would let it crawl on a piece of paper and take it outside to let it go. Freda is survived by her children, Gordon and Kenneth (Peggy) Canavan; two grandchildren, Jayme and Dustin; one sister, Isabella; and numerous nieces and nephews. Besides her loving husband, Ron, Freda was predeceased by her parents, James and Gladys Wilson; two brothers, Fred and James; brother-in-law, Magnus; and niece, Arlene Stang. As per Freda\’s wishes, a private memorial will be held with her family at a later date. In lieu of flowers, memorial gifts in Freda\’s memory may be made to HALO, 12 — 49 Viscount Avenue SW, Medicine Hat, Alberta, T1A 5G4, or to the Foremost Community Hall, 802 — 1st Avenue West, Foremost, Alberta, T0K 0X0. Condolences may be sent through www.saamis.com or to condolences@saamis.com subject heading Freda Canavan. Funeral arrangements are entrusted to SAAMIS MEMORIAL FUNERAL CHAPEL AND CREMATORIUM, "The Chapel in the Park", Medicine Hat, Alberta. Should you wish any additional information, please telephone 1-800-317-2647.

One Condolence for “CANAVAN Freda”

Leave a Condolence for Brendan/Wendy Harty