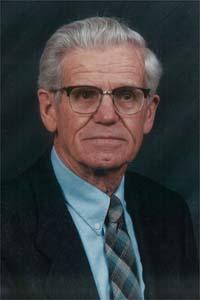 John B. Thiessen beloved husband of Elizabeth Thiessen of Lethbridge AB, went home to be with his Lord on May 7, 2014. John was born March 19, 1926 in Borden, Sask. His family moved to a farm on Sunnyside Road. After he married, John worked in Lethbridge for Purity Dairy (horse and buggy days). They took over from John’s mother and were in the dairy business for 18 years, selling out in 1969. Changing to hay and silaging, they also fed cattle. He drove school bus as well as a special needs van during his farming days. After moving into Lethbridge in 1989 he enjoyed several years of driving for the Lethbridge Herald. John and Elizabeth have five children. Edna (Larry) Nickel, Arnold "Ziff" (Kathy), Lawrence (Kelly), Albert "Mic" (Nancy) and Norma. They enjoyed their 18 grandchildren, and 8 great grandchildren. Together the family spent time skiing, swimming, golfing and travelling. Tim Hortons will also have a few extra chocolate dip doughnuts now that Dad will not be joining them for coffee time. John was well known by his church family at Lakeview Bible Church for his memorization of Bible verses. He was very thankful for a healthy life which allowed him to farm until this past year. We will miss the special person he was and the legacy he passed on to his family. John is survived by 1 sister Helen and 4 brothers, Ike, Abe, Dave and George. Predeceased by 1 sister Anna and 3 brothers, Jake, Henry and Alfred. In memory of John, donations may be made to the Hospital Chaplaincy c/o College Drive Community Church, 2710 College Drive South Lethbridge, AB T1K6K5, and Daily Bread, Day of Discovery at website: odb.org

One Condolence for “THIESSEN John”