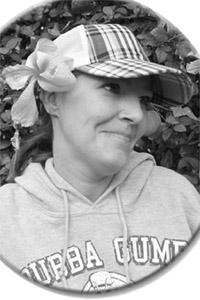 Josee Reina Davies passed away on Saturday May 17th 2014 at home surrounded by her loving family and friends. Josee was born on June 20th 1974 at Porcupine General Hospital in Timmins Ontario. Josee leaves behind her loving husband Mike and their 3 children Gabrielle, Eric and Kyle. Josee is also survived by her father Gil Perrier (Dorise) mother Denise Pilon (Andre), Sister Chantale Perrier (Gord) and her children, Celeste, Sophie, Joel, Julie. Also Mike’s parents Ed and Mary Davies, and his brother Bob and his family; his sisters Cheryl, Kathy and Joann and their families. Josee is also survived by numerous uncles, aunts and cousins. Josee will be forever missed by many close friends back home in Timmins and here in Picture Butte. Josee’s dachshunds Ruby and Ginger will also miss her dearly. Josee was predeceased by her grandparents Bernadette and Armand Dubien and Leo and Colette Perrier and cherished Uncle Roger Dubien. Josee started school at St.Gerad from prek-Gr.8 and attended high school at Ecole Secondaire Theriault until Gr.11. In 1991 Josee moved to Picture Butte, Alberta with her BFF Sharon Duchesne. Josee graduated from PBHS in 1992. Josee attended Lethbridge Community College taking bookkeeping. Josee worked at the Shaugnessy Hotel where she met her soul mate, her rock, the love of her life, Mike Davies. During this time mike and Josee were falling in love; making their plans for their new beginning on August 1st 1998 Mike and Josee were married. They were blessed with 3 beautiful children. Mike and Josee continued to raise their family in Picture Butte until her passing. A Memorial funeral service will be held on Thursday, May 22nd 2014 at St. Catherine’s Church 762 Crescent Avenue North, Picture Butte, Alberta. Donations in Josee’s memory may be made to: Lethbridge American Legion Baseball Association, Box 373 Lethbridge AB, T1J3Y7.