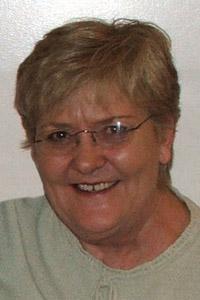 1942-2014
MARIAN BANAS passed away in Lethbridge Regional Hospital on May 30th 2014 following a brief and unexpected occurrence of cancer at the age of 72. Marian was a creative practitioner of the visual arts whose innumerable glassworks, paintings, and engravings consistently garnered praise and admiration. Her artistic skills were surpassed only by her kindness and generosity towards others. She is survived by her two sons Douglas Banas of Ladysmith BC, Vincent Banas, his wife Beth and three loving grandchildren Eve, Emma and Nathaniel all of Livermore, California. She is also survived by her twin brother Martin Hyder and his wife Mary Hyder of Lethbridge AB, sisters-in-law Lillian Hyder and Jonna Banas of Edmonton, as well as 3 nieces and 5 nephews and their families. She is predeceased by her husband John Banas, nephew Dwayne Hyder, and niece Susan Hyder. Marian was born in Westlock AB and raised in Clyde AB before relocating to Edmonton. There she met John Banas where they were subsequently married in 1969. She moved to Lethbridge in 2005 where she stayed until her untimely death. At Marian’s request, no funeral services will be held. She loved her family, her friends, and her pets. All of whom loved her dearly in return. Marian Banas was an exceptional person who will be greatly missed.