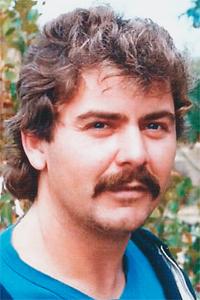 Bernhard \”Ben\” Walser, beloved son of Mrs. Renate Walser and the late Bernhard Walser, passed away at St. Michael’s Palliative Care after a lengthy illness, on Sunday, May 11, 2014 at the age of 57 years. Born January 28, 1957 in Lethbridge, he attended school at Catholic Central alongside his siblings. He then made his career as a security guard at Bridge City Security. In his spare time, Ben enjoyed riding his motorbike, fishing and hiking, especially in Waterton. He was an avid bottle collector with many beautiful pieces. Besides his mother, he is survived by his brothers Michael \”Mike,\” Robert and Dave; sister Susan; sister in law Tina, countless nieces and nephews as well as distant relatives in Germany. A Memorial Service will be held at 11 a.m. on Friday, June 6, 2014 at Evergreen Funeral Home, 327 10 St S Lethbridge with Pastor Al Litchfield officiating. Inurnment will follow in Archmount Cemetery.