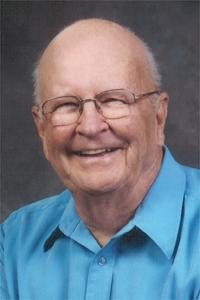 1926 ~ 2014
Bert James Nilsson of Lethbridge (formerly of Warner), beloved husband of the late Muriel Nilsson passed away on June 7, 2014 at the age of 87. Dad was raised in Wrentham, and went to business school in Calgary. He worked briefly at Industrial Acceptance Finance in Lethbridge, where he met Mom. They later moved to Warner where they raised their family. Dad was actively involved in many community organizations, and was always very proud of his ability to obtain finances and grants to help build or improve facilities in his beloved Warner. He retired as County of Warner Administrator in 1990. Bert is survived by his daughters; Sharon (Ken) Turnbull, Janet (Hal) Culler, Debbie (Ken) Brittner, Connie (Alan) Martens and his son Jerry (Theresa) Nilsson, grand- children; Amber Turnbull, Lora (Neil) Websdale, Kelsey (James) Galbraith, Melissa and Amanda Nilsson, Savannah Brittner, Brendan and Shiana Martens, 3 great-grandchildren; Dawson and Rylee Galbraith, and Isla Websdale, as well as 2 brothers; Dean Nilsson and Garth Nilsson. Besides his loving wife Muriel Nilsson, he was predeceased by his parents Ray and Pearl Nilsson, brother Byron Nilsson and sister Marge Cahoon. A Memorial Service will be held at 2:00 PM on Friday, June 13, 2014 at MARTIN BROTHERS RIVERVIEW CHAPEL, 610-4th St. S., Lethbridge, with Pastor Brian Magee, Officiating. Flowers are gratefully declined. Memorial donations may be made to the Warner & District Senio r Citizens (for their senior centre), Heart and Stroke, or Canadian Cancer Society. Send condolences at www.mbfunerals.com.