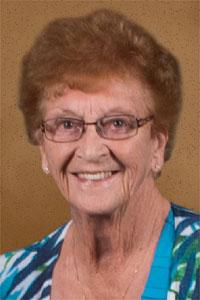 It is with great sadness that the family of Betty Mae Stewart announce her passing on Thursday June 5, 2014 at the age of 81 years. Betty Mae Bannink was born on August 19, 1932 in Lethbridge; the eldest child of Everett and Nettie Bannink. Betty Mae and her siblings Doug, Donald, Jean and Linda grew up in the Monarch area and attended school in Nobleford. Times were lean on the farm but there was never a shortage of love and support in the Bannink household. Perhaps inspired by her mother’s dream of being a teacher, Betty Mae graduated from the University of Alberta (Calgary) Faculty of Education in 1952. She then accepted her first teaching position at the McNally School. Betty Mae found true love and married her lifelong partner Gordon in 1954 – a union that flourished over 54 years. Their family life would begin soon thereafter which saw Betty Mae trade in her teaching career for her made-to-measure role as "Mom". There was no greater supporter of her daughters in education, sports, music and career. She dedicated herself to ensuring her children would take pride in achievement and independence. Her installation as Worthy Matron, Order of the Eastern Star (Heather Chapter) was just one of her own proud moments. While busy with all that entails being a farmer’s wife and mother to three daughters, Betty Mae would work with her mother to help create the Monarch Beavers Club. For many years this Club and its volunteers would entertain hundreds each year through fundraising activities whose proceeds would be dedicated to local charities. She returned to teaching on a substitute basis once her daughters were all in school. She was admired and respected by all students who enjoyed her days in the classroom. Throughout her life, Betty Mae remained a valued community supporter. Her kitchen table was often a welcome gathering place for conversation or comfort for those in need. And all were rewarded with her infamous baking. Later in life, her three granddaughters Emma, Jillian and Hope provided enormous joy – another generation of budding pride. Betty Mae leaves to mourn her three daughters – Laurie Hacker (Bob Hacker), Barbara Stewart and Patti Stewart (Peter Marshall); granddaughters Emma Hacker, Jillian Hacker and Hope Stewart-Marshall; brothers Douglas Bannink (Dona) and Donald Bannink (Marilyn); brother-in-law Andy Veres (Louise) in addition to numerous nieces and nephews, cousins, friends and neighbours. She was predeceased by husband Gordon; parents Everett and Nettie; sisters Jean Veres and Linda Keller; and son-in-law Ron Poole. A Funeral Service will be held at MCKILLOP UNITED CHURCH – 2329 15 Ave S, Lethbridge, AB. on Tuesday, June 10, 2014 at 2:00 PM with Reverend Trevor Potter officiating. In lieu of flowers, donations can be made to the Alberta Heart & Stroke Foundation or The Canadian Cancer Society.