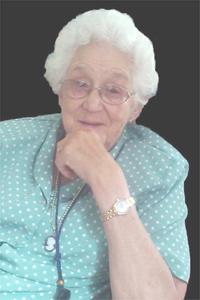 ZELMA MCBRIDE INNES, beloved wife of the late Charles F. Innes, passed away peacefully on Friday, June 13, 2014 at the age of 90 years. Zelma was born in Barnwell, Alberta on April 10, 1924. Her parents were Parley McBride, and Ora Geneva Day. Zelma and Charles were married 72 years ago on June 17, 1942. Zelma is survived by their six children, Fred (Marjorie), David (Carol), Jack (Marilyn), Shirley (Sid Jones), Richard (Lorna) and Patricia (Ken Schneider). The Funeral Service will be held at the Knight Street LDS Chapel in Raymond on Friday, June 20th, 2014 at 1:00 p.m. Interment in the Stirling Cemetery, Stirling, Alberta. Friends may meet the family from 11:30 a.m. to 12:45 p.m., prior to the Service. E-mail your condolences to: legacyfh@telus.net. Arrangements entrusted to Berry Gorham.