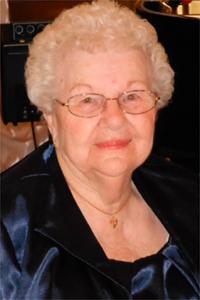 1924 ~ 2014
Mary Ellen Evers of Lethbridge, beloved wife of the late Lloyd Evers, passed away peacefully on June 20, 2014 at the age of 90 years. Mary was born on the family farm near Pukwana, South Dakota on May 14, 1924 to George and Mary Leiferman. She and her identical twin sister Margaret were delivered by their father and were the youngest of 7 children. Mary was married to her high school sweetheart on September 4, 1946 in Chamberlain, South Dakota. Mary spent some of her early years teaching, but devoted the majority of her life to being a wonderful, kind, nurturing wife, mother, grandmother and great grandmother. One of Mom\’s greatest passions was sports. She spent endless hours score keeping, cheering and supporting her kids in whatever sport they participated in, especially baseball/softball and basketball. She was a member of the Coutts CWL for many years. Besides spending as much time as possible with her kids, grandkids and great grandkids, she had two dreams. She dreamt to someday see the Toronto Raptors play and also to go to spring training with the Blue Jays. Both of these dreams were realized when she was in her 80\’s. It was also special that she was able to visit her twin sister Margaret in California every summer, and when she wasn\’t traveling she enjoyed playing cards with family and friends including Pinochle, Bridge and Canasta. Mom spent the last 9 years of her life at Garden View Lodge, where she made so many great memories. This truly was the perfect place for her to be and it made her so happy. They were a true blessing for her and she, a true blessing for them. Mary is survived by her children Connie (Tom) Gilkison of Salem, OR; Dan (Sandy) Evers of Monmouth, OR; Randy (Lorri) Evers of Brasada Ranch, OR; Nancy Van Kasteren of Okotoks, AB; sister Margaret Healey of Anaheim, CA; ten grandchildren, 12 great grandchildren and numerous nieces and nephews. She was predeceased by her husband Lloyd in 2005 and son Doug in 2008. Prayers will be held at 7:00pm on Wednesday, June 25, 2014 at MARTIN BROTHERS RIVERVIEW CHAPEL, 610 – 4 St S, Lethbridge. A Funeral Mass will be celebrated at 2:00pm on Thursday, June 26, 2014 at ST. BASIL\’S CATHOLIC CHURCH, 604 – 13 St. N Lethbridge, with Father Nathan Siray, officiating. In lieu of flowers, memorial donations may be made to a charity of your choice. Send condolences at www.mbfunerals.com.