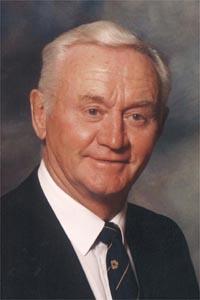 1932 ~ 2014
Mr. Melvin Andres of Lethbridge, beloved husband of Sylvia Andres, unexpectedly passed away at sunrise on Tuesday, June 24, 2014 at the age of 81 years. He was born on November 3, 1932 in Coaldale, AB to the late Jacob and Helene Andres, where he was raised on a farm west of Coaldale. Mel is lovingly remembered by his wife of 54 years, Sylvia. He also leaves behind his son Craig (Cheryl); daughters Melanie (Edward) Vegter, Leslee (Mike) Canadine; and grandchildren Brett, Cameron and Madison Andres, Kaitee, Scott and Eric Vegter, Jane and Quinn Canadine; brother Jake (Verdell); sisters, Johanna Dyck and Anne (Kerm) Daum; sisters-in-law Frances Pollock, Anne Harder and brother-in-law Richard (Marilyn) Neufeld. Melvin was predeceased by his brother, Eric Harder and brothers-in-law David Dyck and Sid Pollock. For Mel, life centered around his family, friends and business. He was incredibly proud of his children and grandchildren; their accomplishments, and adventures. He enjoyed a long and rewarding career in business, beginning with Andres Transport in 1957, with his brother, Jake. They sold in 1978 to start Andres Trailer Sales and Rentals. He then retired in 1993, at which time he enjoyed spending time in the Palm Springs area. We will always treasure Mel\’s love for adventure , for a job well done and especially for life. Visitation will be held at 7:00pm —9:00pm on Thursday, June 26, 2014 at MARTIN BROTHERS RIVERVIEW CHAPEL, 610 – 4th St. South, Lethbridge, AB. A Funeral Service will be held at 1:00pm on Friday, June 27, 2014 at FIRST BAPTIST CHURCH, 1614 – 5 Ave South, Lethbridge, AB. In lieu of flowers, memorial donations may be made to Mill Creek Baptist Camp, Box 132, Pincher Creek, Alberta T0K 1W0. Send condolences at www.mbfunerals.com.