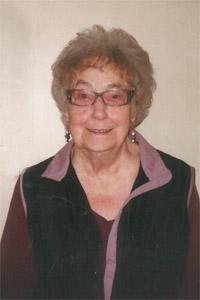 ELEANORA VOGT nee Madsen, beloved wife of Bill Vogt of Picture Butte, passed away at the Chinook Regional Hospital on Saturday, July 5, 2014 at the age of 88 years. Besides her loving husband she is survived by her five children and their families, whom she loved dearly: Grant (Echo) Vogt; Greg (Elaine) Vogt; Terry (Pam) Vogt; Suzanne (Darren) McIntosh; Sherryl (Ed) Loman and her numerous grandchildren and great grandchildren: Lisa (Mark) Potvin (Amber & Aiden), Tiger (Kurt) Vogt, Errol Vogt; Hillary (Ali & Naveed) Norouzi, Colleen (Brandon) Chow, Sheena (Jason & Eloise) LeMoine, Kyle (Cortney) Vogt, Samara (Jordan) McIntosh, Nikki McIntosh, Justin (Ashley) Loman, Jocelyn (Frank) Loman, and Luke Loman – as well as her special nephew Loren Montgomery (Janice & Jenna). Eleanora was predeceased by her parents Chris and Sophia Madsen, brother Bob, sister Elene and numerous brother and sisters-in-law. Mrs. Eleanora Christine Vogt, beloved wife of Mr. Bill Vogt, was born in Drumheller, Alberta; the youngest of Chris and Sophia Madsen\’ 3 children. She grew up on a farm in the Danish community of Dalum, 5 miles south of Wayne, Alberta, which is now a ghost mining town. Eleanora spent grades 1-9 in a one room country school. Grades 10 & 11 were spent in Drumheller and grade 12 and normal school in Calgary. Her first teaching position was in a one room school near Drumheller. The next year was at Crystal lake School near Lethbridge, where she met Bill. Eleanora then taught a year in Nobleford as a Grade 2 Teacher. She spent the remainder of her teaching career in Picture Butte, at Dorothy Dalgliesh School for two years and then at St. Catherine’s school until she retired in 1988. She was beloved by her students, many of who commented that \”Mrs. Vogt\” was their favorite teacher. Bill and Eleanora eloped in Great Falls in 1948 and moved from Lethbridge to Picture Butte in 1951 where they both resided until Eleanora\’s passing. A Tree will be planted in Eleanora\’s memory at a later date. Her kind and generous spirit will be carried on in all of the people whose lives she touched. In Lieu of flowers, donations can be made to the Picture Butte Fire Fighters Association – Box 1065, Picture Butte, Alberta, T0K 1V0. A Memorial Celebration will be held on July 19, 2014 at 2:00 P.M. at the Picture Butte Community Centre – 607 Hwy Avenue N, Picture Butte, Alberta.

One Condolence for “VOGT Eleanora”