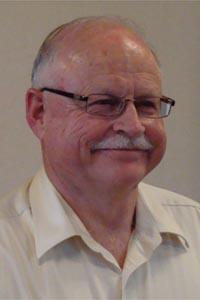 Wilfred "Wilf" John Sparkes a.k.a. Sparky, beloved husband of Chris, passed away unexpectedly but peacefully in his sleep on Monday July 7 in Picture Butte, at the age of 66 years. He leaves behind his wife Chris of 43 years; his two children Jenny (Cliff) and Michael (Shannon); 4 grandchildren, Steven (Angela), Dustin, Josephine and Madeline; and one great- granddaughter, Ila. Wilf was born on October 16, 1947, to Leslie and Daisy Sparkes. The youngest of five children, he attended elementary and high school in Claresholm. He and his brothers helped his father, Leslie on the family farm until Wilf moved to Calgary. He graduated from SAIT in 1970 with an electrical technology degree. Wilf and Chris were married on August 1, 1970. He got a job with Calgary Power and the couple moved to Claresholm. Jenny was born in 1972, after which the family was transferred to Cochrane. The family was transferred again to Lamont, where Michael came along in 1976. Shortly afterwards, the family moved to Picture Butte and Wilf started working for the City of Lethbridge in 1979 in the electrical department. He retired from the City in 2007. Wilf volunteered with the Picture Butte Fire Department for 19 years. Sparky also enjoyed his time with the "Butte Hotel Babes" slo-pitch team, curling and participating in numerous hose laying competitions. He enjoyed camping with his family, especially teaching his grandsons and son-in-law how to fly-fish. A Memorial Service will be held at 11:00 A.M., on Friday, July 11, 2014 at CHRISTENSEN SALMON GENERATIONS FUNERAL HOME, 703 — 13 St. N., Lethbridge, AB. In lieu of flowers, memorial donations can be made to the Picture Butte Fire Department at Box 1065, Picture Butte, T0K 1V0.