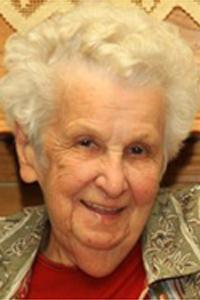 The family of Joyce Clarada MacLennan (nee Gill) is deeply saddened by her passing. She left us peacefully at St Michael’s Palliative Care Centre in Lethbridge on June 30, 2014 at the age of 90. She is survived by her 5 children: Gail (Albert) de Vos; Linda (Bob) French; Susan (Gerry) Baril; Gary Allen; Cheryl (Clint) Fisher; ten grandchildren; twenty eight great grandchildren; sister in law Pat Heppler; and niece Colleen. She was predeceased by her husband Robert MacLennan; parents Bert and Ella Heppler; brother Glen. Joyce was born December 18, 1923 in Champion, Alberta and completed her education in Lethbridge. She married G.L. (Bus) Allen in 1942 and moved to the Bow Island area where her children were raised. In 1966 the family moved to Calgary where Joyce lived until 2005. She then returned to Lethbridge where she resided until her passing. Joyce was a devoted caregiver to her family and special friends. She always welcomed them into her home and could prepare a full meal from what looked like an empty fridge. Her homemade pies were simply the best. She was employed by the Government of Alberta at \”The San\” in Bowness for many years. Upon her retirement she became a proud member of the Bowness Seniors Centre. She loved to go camping in the motorhome to special lakes in Saskatchewan and throughout the western provinces. Vacation tours to Alaska and the Maritimes were fondly remembered by her. An avid reader throughout her life, Joyce was devastated by failing eyesight; however, this became more bearable by assistance from the CNIB with their Daisy Disc audio book program. Joyce’s family is deeply grateful for the care and compassion she received as her illness progressed: Pemmican Lodge staff and residents; Home Care nurses and aides; St Michaels Palliative Care Centre. We thank you from the bottom of our hearts. A private celebration of Mom’s life culminated her worldly journey. She has now embarked on a new experience of peace and happiness. She was laid to rest at the Archmount Cemetery in Lethbridge.