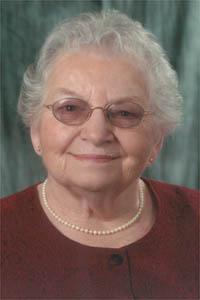 MRS. BERNIECE LOUISE MELDRUM, beloved wife of the late Mr. Donald Meldrum, of Lethbridge, passed away at the Chinook Regional Hospital on Tuesday, July 8th, 2014 at the age of 88 years. Berniece was born on June 5, 1926 at her Grandmother\’s house in New Dayton, AB. Berniece\’s education was all in one room schools – the Independence School and the Owen School near Wrentham. Berniece and Don were married on June 27, 1947 and lived and worked most of their married life in the Granum area. After retiring, they moved to Parkbridge Estates in Lethbridge and Berniece has resided at the Garden View lodge for the past nine years. Berniece always grew an abundant garden, but her real pleasure came from her immaculate yard and flower bed (especially her roses). Our mother was without a doubt the best cook ever. She loved cooking and after she retired she had her own cookbook printed and gave a copy to each of her children and grandchildren as a remembrance of her. Every year at Christmas, Berniece and Don made chocolates and for a few years they sold them and spent many hours keeping up to the orders. Mom\’s passion was quilting. We all have quilts that have become real family treasures. Berniece\’s great grandfather homesteaded at Stirling, AB in the 1890\’s. Our family has now grown to seven generations of proud Southern Albertans. Our Mother\’s greatest accomplishment is life was being a kind, caring and giving wife, mother and grandmother. She will be sadly missed and lovingly remembered by each of us. Berniece is survived by two daughters, Linda (Bruce) Murray and their children Tricia (Ron-deceased) , and Wesley (Jenn); Judy (Terry) Reardon and their children Nikki (Rob), Chad and Tyler; two sons Dean Meldrum and his children, Tom (Angie), Candace (Dana) and Bradley; Bryce (Judy) Meldrum and their children Jason (Keira) and Lindsay (Boof). Berniece is also survived by seven great-grandchildren and her two brothers Harold and Arnold. Berniece was predeceased by her husband Don in 1997, her parents Paul and Eldora Wesley, her grandson-in-law Ron Hilgersom, her brothers Lenard, Cecil and Larry, and her sisters Ethel and Grace. Berniece was strongly devoted to her faith and lived her life accordingly. A Funeral Service will be held at THE CHURCH OF JESUS CHRIST OF LATTER DAY SAINTS – SCENIC DRIVE CHAPEL, 2410 – 28 Street South, Lethbridge, AB on Friday, July 11, 2014 at 11:00 A.M. with Bishop Don Gibb officiating. Interment to follow at the Magrath Cemetery.