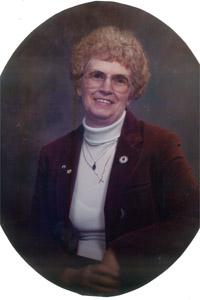 FERN MARY ARDELLI (nee Gullacher), October 10, 1926 -July 19, 2014 seventh child of eight born to Petra and Wilbur Gullacher, at Govan, Saskatchewan. Mary received her early education at Constance School while living on the family farm. Later she took two years high school at Simpson then graduated from City Park Cellegiate in Saskatoon. Twice she attempted nursing school but, after injuries to her back, had to give up her dream of helping others. After raising her three sons, she returned to school and graduated from Lethbridge Community College with a certificate in General Secretairal Science. Mary counted her moving to be over 60 times in Ontario, Sakatchewan, Alberta and British Columbia. Mary was predeceased by her mother in 1937, father 1974 sisters, Fay 1973, Laurine 1983, Alva 2003, brothers, Earl 1985, Wilfred 1994, Orville 1998 and Curtis 1999. She leaves to mourn her sons Dr. Gerard (Kathryn) McLane of Portland, Oregon, Jay (Darlene) McLane of Lethbridge and Michael (Jill) McLane of Calgary, four grandchildren Melissa (Trent) Horst of Honeybrook, Pennsylvania, Stephen (Casey) McLane of Johnson City, Tennessee, Jonathan McLane of Berrien Springs, Michigan and Diane Legault (Brendan Nalder) of Lethbridge, AB and three great grandchildren; Kaleigh and Mason Horst, Kaitlyn Nalder and another soon to be born great-granddaughter. Fern Mary spent her life trying to help others and must have helped furnish a dozen homes for people. If she had something in her home and someone needed it, they got it. She loved to travel and went across Canada, United States, Mexico, Europe, Singapore and Malaysia. In later years she disliked flying and travelled wherever her car would take her. Sometimes her car was known to be flying but only once was told to slow down by an RCMP officer, however many times by her children. She would say she could never see the sense of taking an hour to get somewhere when she could do it in much less time. She was a long time faithful member of the Catholic Women’s League of Canada and always enjoyed working with this group whenever possible. She also enjoyed working with the Mission and development group at her church and for some years instigated the making of quilts for the missions. She also organized the collection of the gifts for Harbor House at Christmas. She hopes to be remembered as a prayerful, loving mother and grandmother, as being a loving faithful friend who tried to love all. "Jesus has been visiting my house for many years, now I think it is time I visited His house. Amen" Prayer Services will be held at CORNERSTONE FUNERAL HOME, 2800 Mayor Magrath Drive South, Lethbridge, AB on Friday, July 25, 2014 at 7:00 P.M. A Funeral Mass will be Celebrated at OUR LADY OF THE ASSUMPTION CATHOLIC CHURCH, 2405-12th Avenue South, Lethbridge, AB on Saturday, July 26, 2014 at 1:00 P.M. with Father Nathan Siray, Celebrant. Interment to follow in the Mountain View Cemetery. In lieu of flowers, donations may be made to the Alberta Children’s Hospital, 2888 Shaganappi Trail N.W., Calgary, AB, T3B 6A8.

One Condolence for “ARDELLI Mary”