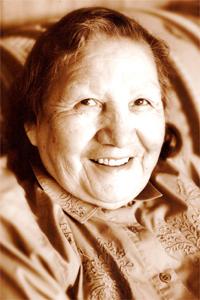 Taakiimm was born June 4th, 1927 at Piikani Nation and died Monday, July 21st, 2104 at home surrounded by her family. Taakiimm’s parents were the late Willy and Laura Crow Shoe. She was raised on the Piikani Nation along with her brothers, and sisters. She attended the St. Cyprian Residential School, and after leaving school she helped her step father with ranch work, tending to livestock, putting up feed, and other chores. Taakiimm was known to be the first lady in Piikani to own a drivers’ license, and would drive for those that needed a driver. She was a skilled seamstress; sewing tipis of all sizes, including buffalo hide tipis, which she sewed by hand. Some of her work can be seen at Head Smashed In Buffalo Jump Interpretive Centre and Writing on the Stone Interpretive Centre. She was also skilled in making buckskin regalias, including hers, her children and grandchildren. She enjoyed beading, baking, bingo, family gatherings, powwows, and most of all feather games. Taakiimm fully supported her husband in teaching the young people our ways, especially in dancing. She was instrumental in forming the first Piikani Nation dance troupe and helped make their dance regalia. Most important of all she was a mother, raising her children and teaching them the importance of family. She always supported her children and grandchildren in their endeavors, whether it was dancing, or sports. She enjoyed watching her grandchildren playing hockey and slow-pitch, or rodeo, she was their biggest fan. She enjoyed watching NHL games, and was a Calgary Flames Fan. Taakiimm enjoyed travelling with her children, sister and brother. She traveled both in Canada and United States, from coast to coast to various functions including ceremonies, powwows, and family trips. Most importantly, Taakiimm was a strong supporter and believer in her community. She was a grandmother to Piikani Nation and she acknowledged every individual with a handshake and a smile. She has given blackfoot names to many people who seeked spiritual guidance from her and was always ready to share her knowledge. She always felted honored when asked to say the prayer at any function in her community and outside community. She had an abundance of knowledge from plants and herbs, to culture and language, and to history that she gained from her parents and grandparents her. She was born in an era that was rich in our Piikani ways. She was the last traditional elder on the Piikani Nation. Taakiimm was predeceased by her parents, the late Willy and Laura Crow Shoe, brothers: Jack, Joe, Richard, and David Crow Shoe, her sister: Ethel Crow Shoe, and Holy Woman. Her Husband, the Late Chief John Yellow Horn, her sons: Walter, Robert, Patrick, Charlie, and Warren (Sonny), her daughter: Gladys Yellow Horn. Taakiimm will be dearly missed by her children: Shirlee(Floyd Age), Jo-Ann (Emil), Velma (Jerry), Pauline, Albertine and George(Crystal), Thomas (Joanne) and Eva Bad Eagle, her Sister: Margaret Plain Eagle, her brother: Arthur Crow Shoe. Her grandchildren: Natasha, Cody, Austin, Andrea, Joshua, JT, Vanessa, Charles, Robert, Diandra, Daice, Ellie, Lacey, Willy, JonCall, Trey, Sienna, Clayton, and Maria. Also by all her other grandchildren, great grandchildren, great great grandchildren and including her extended family too numerous to mention. We apologize if we have missed anyone. A Prayer Service will be held on Thursday, July 24, 2014 at 9:00 a.m. at the Snodgrass Funeral Home "Pincher Creek" with the Wake Service starting at 10:00 a.m. following at Elsie’s residence in Brocket, Alberta. The Funeral Service will be held at the Piikani Nation Community Hall on Friday, July 25, 2014 at 11:00 a.m. with the burial in the Brocket Cemetery. A Feast will be held at her residence after the Graveside Service. To email condolences, please visit www.snodgrassfuneralhomes.com. Funeral arrangement entrusted to Snodgrass Funeral Home, Pincher Creek, AB (403) 627-4864.