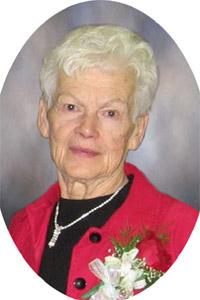 (nee Hricise)
October 1, 1924 – July 27, 2014
It is with great sadness that we announce the passing of our dearly beloved mother, Anna Stanko, on July 27, 2014 at the age of 89. Anna was a wonderful spirit – a wife, mother, grandmother, great-grandmother, and great-great-grandmother. She is survived by her three loving children – daughter Carol (Peter) Kempenaar, son Robert Stanko, and daughter Bonny (Bob) Chabay; her four grandchildren – Robert (Lorelei) Kempenaar, Shelley (Paul) Polczer, Jackie Chabay (Dave Burgemeister), and Brianne Chabay; her six great-grandchildren – Spencer (Jordanna Spence), Blake, Jordynn, Taylor, Bailey and Jackson; her one great-great-grandchild – Kaysen. She also leaves to mourn her passing her brother Bill (Georgette) Hricise, her daughter-in-law Karen Crockett Stanko, sisters-in-law Pauline Strickland and Rose Stanko, and many nieces, nephews and their families. Anna was predeceased by her husband Alexander, her son Eddy, her parents Bill and Helen Hricise, her sister Mary Malec and numerous brothers and sisters-in-law. Anna was born on October 1, 1924 in Kuzmino, Czechoslovakia. She immigrated to Canada in 1937 with her mother and sister to join with her father who had immigrated a few years earlier. When she came to Lethbridge, Mom attended Galbraith School. There she excelled in track and field and had impeccable handwriting. She received many certificates for these accomplishments, all the while learning the English language. After her schooling she went to work at Lee Duck Cleaners and the Ritz Cafe. It was at the Ritz Cafe where she met the love of her life, Alex, and they married on February 25, 1945. They farmed in the Readymade District where they raised their four children. Mom was a hard working farm wife – milking cows, driving truck during seeding and harvesting and delivering many delicious meals to the men who helped them farm. Mom was an avid gardener and raised a fruitful and bountiful garden – she really had a green thumb and loved her garden and flowers immensely. Mom was a tremendous cook; especially her cabbage rolls and cutlets; she was an excellent baker, sewer and crocheter. Her home was always open to people she loved. She would take from herself to give to others. In the early seventies Mom and Dad retired to their brand new home in south Lethbridge. There again she raised a bountiful garden and had beautiful flowers that graced her yard. The move to Lethbridge gave Mom an opportunity to go to SS. Peter and Paul Greek Catholic Church on a weekly basis. Mom was a faithful member of the church, the choir, and the Ladies Aid Association, where she held the Presidency position for at least eight years. She excelled in this position as she helped raise many funds for the church. Mom had a beautiful voice and complemented the choir immensely. Many bake sales, teas and St. Nicholas suppers were hosted by Mom. She made breads and noodles for the sales, but nothing beat her \”mile high\” angel food cake. Going to church and being in God’s house was a great event for Mom. While she was able to, she attended church every Sunday. May eternal rest be granted unto thee, O Lord, and let perpetual light shine upon you – may you rest in peace! We LOVE you Mom and may God receive you with open arms in heaven! We will never forget your kindness, cooperation and love – xoxoxo. Funeral Parastas will be held at SS. PETER AND PAUL GREEK CATHOLIC CHURCH, 643 – 12B Street North, Lethbridge on Monday, August 4, 2014 at 7:00 P.M. with Fathers Gary Sedgwick and Mark Bayrock, Celebrants. A Divine Liturgy will be held at SS. PETER AND PAUL GREEK CATHOLIC CHURCH, on Tuesday, August 5, 2014 at 10:00 A.M. with Fathers Gary Sedgwick and Mark Bayrock, Celebrants. Interment to follow at Mountain View Cemetery.