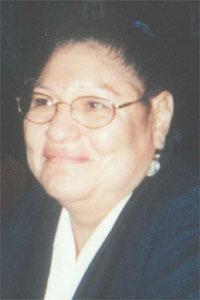 (Long Time Medicine Pipe Woman)
1957 – 2014
It is with great heartfelt sadness that we announce the passing of MARIE \”BERTHA\” BLACK FACE, of the Blood Reserve who passed away suddenly at the age of 57 years old on August 1st, 2014. Creator has called to home our mother, wife, grandmother and lifelong friend. She was predeceased by her parents Lawrence and Janie Hairy Bull. Bertha was born at the Blood Indian Hospital in Cardston, Alberta on March 6th, 1957. She received her education at Red Crow College and Lethbridge College. In later years she became a counselor for the youth at the adolescence treatment Centre located in Cardston, Alberta. Bertha was well known for her outstanding personality, kind gentleness, and humour. She will be remembered for the many times she brought humour to her brothers and sisters in the sacred society of the Bull Horn Society, as she will be remembered fondly by offering much laughter to the most intense moments of their important ceremonial teachings. Bertha is survived by her loving husband, Homer Young Pine; children: Cheryl Conway, Elita Hairy Bull (Arnold), Tamara Card (Jim), Gilbert Hairy Bull (Jessica), Natasha Hairy Bull, Renate Goodstriker, Coy Black Water and numerous special grandchildren. She will be especially missed by her grandson \”Shorty\”, whom she raised from infancy. Bertha is survived by her sister, Mary Louise Many Grey Horses (Norbert); Brothers: David Striped Wolf (Evelyn), Phillip Hairy Bull. She is predeceased by brother, Larry Hairy Bull and sister, Julia Shouting. Bertha’s larger than life independence was to be admired. Bertha would never turn her back on anyone in need and would never ask for anything in return. Rest now Bertha, your work here is done…. A Family Service will be held on Thursday, August 7th, 2014 at Legacy Funeral Home in Cardston, Alberta from 5:00 to 6:00 p.m. A Wake Service will be held at Senator Gladstone Hall, Blood Reserve on Thursday, August 7th, 2014 from 7:00 to 11:00 p.m. The Funeral Service will be held at St. Mary’s Catholic Church, Blood Reserve on Friday, August 8th at 11:00 a.m. Interment in the Pioneer Cemetery, Blood Reserve. E-mail condolences to: legacyfh@telus.net Funeral arrangements entrusted to Berry Gorham.