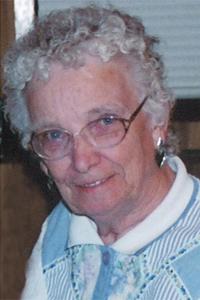 1930 ~ 2014
We are sad to announce the sudden passing of our dear wife, mother, and sister, Irma Dogterom on Wednesday, August 5, 2014 at the age of 83 years. Mom is survived by her devoted husband Jacob, daughters Coral (Bill) East, Jan (Jim) Kuhn, Nancy Dogterom and son Dave (Donna) Dogterom; sisters Thelma Coutts and Pat Bull, seven grandchildren and numerous nieces and nephews. Irma was born in Lethbridge on October 3, 1930 the 4th of seven children. After graduating high school she met and married Jake Dogterom. They set up house on the farm east of Lethbridge and Coral, Jan, Dave, and Nancy soon followed. Mom became active in the work on the farm, raising 4 children and volunteering at the McNally Home and School Association. Later on she worked many years as a Library Clerk at McNally, Sunnyside, Galbraith, and Gilbert Patterson Schools. Mom and Dad began square dancing and made many long lasting friendships throughout Southern Alberta and beyond. She also discovered a passion for local history, authoring 2 books and assisting on many more. Besides her husband and children, Mom was most proud of her efforts to launch the Legacy Ridge Development honouring local area women. This and many other community achievements culminated in her being awarded the Queens Jubilee Medallion twice. Mom also volunteered many years as secretary of the Lethbridge Historical Society as well as writing and producing their newsletter. Three years ago, Mom and Dad moved to Blackrock Terrace. Just prior to this move and in the years since, various illnesses and medical problems dogged both Mom and Dad. Throughout these trials Mom was always upbeat and positive even when Dad had to go into the Legacy Ridge complex. Our family wishes to thank all the staff, nurses, doctors, and caregivers at Blackrock, Legacy Ridge, Chinook Regional Hospital, and Home Care Support. A Memorial Service will be held at 1:30pm on Monday, August 11, 2014 at MARTIN BROTHERS RIVERVIEW CHAPEL, 610 – 4th Street South, Lethbridge, AB. Memorial donations may be made in Irma’s name to the Heart and Stroke Foundation -Box 2211, Lethbridge, AB, T1J 4K7, or the YWCA – 604 8 St. South, Lethbridge, AB, T1J 2K1. Send condolences at www.mbfunerals.com.