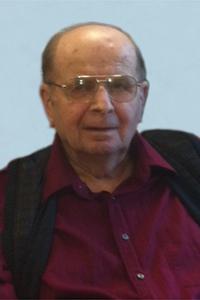 1920 ~ 2014
Mr. Steve Angyal, beloved husband to Helen Angyal, passed away at Milk River Long Term Care on Thursday, August 21, 2014 at the age of 94. Steve was born in Hungary on May 13, 1920 and came to Canada on December 31, 1924 settling in Milk River. He attended school from age 7 to 14, completing Grade 8 while teaching himself English. Steve was in the Infantry from December 4, 1941 through January 26, 1946, serving in the Aleutians and Holland. Upon his return he met Helen and they were married on November 11, 1946. They moved onto the family farm in the 1-17 District southwest of Milk River where from 1947 until 1980 he farmed the land and raised purebred Herefords. Steve was known as a humble and fair man and was respected by all who had dealings with him. He was proud of his accomplishments as his family had to borrow $10 to get from Montreal to Milk River. The grandchildren will always remember staying at Grandpa and Grandma’s farm as there were always fun things to do in the barn and amazing wiener roasts and orange floats in the evenings. After retirement Steve and Helen purchased a motorhome and travelled throughout Canada and the United States with his brother Mike and his wife Marion. He also enjoyed playing and watching baseball, golf, and curling and could be found at the diamonds or ice rink when the grandchildren were playing. Steve is survived by his three daughters and one son; Christine Barnhart of Edmonton, Kathy (Gordon) McCarthy of Milk River, Sheila (John) Mazutinec of Milk River, and Ron (Barbara) Angyal of Lethbridge. He was also blessed with nine grandchildren and eleven great-grandchildren; Janice Leonard (Cassidy & Alina); Raelene Barnhart (Brandon); Shannon Kampen (Alix, Emily & Jonathon); Scott (Trish) Angyal (McKinley & Declan); Kelsi (Kelly) Hicks (Conall & Brinley); Jennifer McCarthy; Colin (Tricia) McCarthy; Trevor (Carla) Mazutinec (Emmett); and Trent Mazutinec. He was predeceased by his son Gregory, parents Mike and Mary, brother Mike, and sister Mary.
Rest in peace dad, your work is done
We will miss you always
A Prayer Service led by Maureen Condon Horon, will be held at 7:00pm on Monday, August 25, 2014 at ST. PETER’S ROMAN CATHOLIC CHURCH, 321 Main St. N., Milk River, Alberta. A Funeral Service will be held at 11:00am on Tuesday, August 26, 2014 at ST. PETER’S ROMAN CATHOLIC CHURCH, 321 Main St. N., Milk River, Alberta with Father Dominic Nguyen, officiating. In lieu of flowers, donations can be made to the Prairie Rose Lodge Building Fund (make cheques payable to the Town of Milk River specifying the Prairie Rose Lodge Building Fund), P.O. Box 270, Milk River, Alberta TOK 1MO; or Milk River Long Term Care Resident Council, P.O. Box 90, Milk River, Alberta TOK 1MO; or a charity of your choice. Send condolences at www.mbfunerals.com.