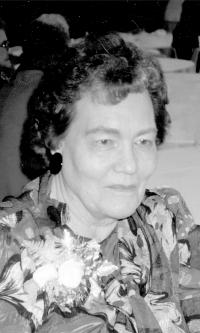 EUVADA NALDER GILL was born in Raymond on February 26, 1926 the eldest of seven children born to Roy and Verona Nalder, and passed away in Lethbridge on Saturday, August 23, 2014 in her 89th year. She was predeceased by her parents Roy and Verona Nalder, her husband Harold, Harold’s parents Reg and Martha Gill, Harold’s sister and her husband Marge and Ben Rasmussen, daughter Linda Birley, brothers Theron and Gene, brothers-in-law Murray Passmore, Owen Selk, Robert Hanna, son-in-law Dennis McCollum, daughter-in-law Nancy Gill and great granddaughter Ashley Sills. Euvada is survived by her daughter Rita (Dan) Tolley and their five children: Karen Tolley (Al Heninger) and her son Brian; Michael (Michelle) Tolley and sons Grant and Cameron; Richard (Roxane) Tolley and children Matthew and Sarah; Beverly Tolley and children Danielle and Austin; Kimberly (Dave) Lawlor and children William, Lauren, and Nicholas. Euvada is survived by her daughter Brenda McCollum and her two daughters Debbie (Bob) Sills and children Kelsie, Lindsay, Tyler, Zachary, and Andrew; and her daughter Donna McCollum. She is survived by her son Reg and his son Scott. She is survived by Linda’s five children: Barbara (Kelly) Leonard and children Bella and Angel; Wendy (Chris) White and children Carah, Mark, Megan, Rebekah and Kirstin; Patrick (Heather) Birley and children: Sarah, Rachel and Josh; John (Kelly) Birley and children Christian and Isaac; Robin (Olivia) Birley. Euvada is also survived by her sisters Velda Passmore, Carlene (Ken) Culler, Fonda Hanna, brother Gordon (Lorraine) Nalder; sisters-in-law Lucille and Marjorie and their families as well as Ben and Marge Rasmussen’s family. Euvada lived most of her life in Picture Butte until moving to Lethbridge two years ago due to ill health. She was a faithful member of The Church of Jesus Christ of Latter-day Saints, accepting callings in many of the church organizations; The Funeral Service will be held at The Church of Jesus Christ of Latter-day Saints, PICTURE BUTTE CHAPEL, 404 Willow Avenue, Picture Butte on Thursday, August 28, 2014 at 2:00 p.m. Friends may meet the family prior to the service at the church from 1:00 to 1:45 p.m. Interment to follow at the Archmount Cemetery, Lethbridge at 4:30 p.m.