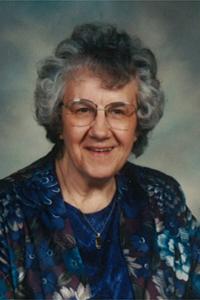 1925 ~ 2014
Mrs. Marielle Mathilda Paquin, beloved wife of the late Mr. Alphonse Paquin, passed away on Thursday, August 21, 2014 at the age of 88 years. Marielle was born on December 31, 1925 to Anna and Alexandre Moreau in St. Norbert, Manitoba where she was raised and completed her elementary and high school. At the age of 18 years, Marielle entered Novitiate of the Grey Nuns in St. Boniface where she spent the next 25 years. Three years later, she met Alphonse and they were married in 1971. A Funeral Service will be held at 11:00am on Tuesday, August 26, 2014 at OUR LADY OF THE ASSUMPTION CATHOLIC CHURCH, 2405 12th Avenue South, Lethbridge, Alberta, with Father Kevin Tumback, celebrant. Send condolences at www.mbfunerals.com.