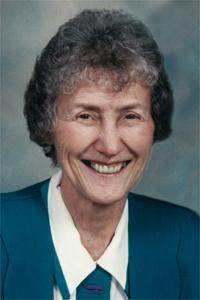 1927 ~ 2014
Ann was born April 17, 1927 in the Teerling family home alongside the dike near the town of Usquert in the Netherlands. She was the third of five children born to Siepko and Reina Teerling. She attended grade school in Usquert and grew up with a desire to become a nurse. As a young lady, she completed her nurses training at the psychiatric hospital in Zuidlaren. This was very difficult physically and took a toll on Ann, but being strong and determined she saw it through to the end. When the Teerling family decided to immigrate, she did not hesitate to come along, and in 1952 they came to Canada landing in Domremy, Saskatchewan, northeast of Saskatoon. After rewriting Canadian Nursing Qualification exams, she began her Canadian nursing career in nearby Cudworth, Saskatchewan. Soon after, her best friend Wietske, also a nurse, followed her to Canada and together they embarked upon a cross Canada nursing adventure. They first headed off to Vancouver Island to work in Duncan BC. Later, they went to Ontario and worked at the Mount Sinai Hospital in Toronto and in several other cities. In 1958, The Teerling family relocated to southern Alberta after buying a farm near Vauxhall. Ann was drawn westward again and took a nursing position at the nearby Taber hospital so she could be near her family. She eventually met Roger Van Dellen through mutual friends and they were married in 1962 and took up residence in Lethbridge. Unable to have children of their own, they adopted a son Ed and a daughter Sheila. Roger & Ann started farming near Nobleford in 1966 and moved to the farm in 1974. Ann put her nursing career on hold and stayed at home to raise her children. She returned to nursing during her children’s high school years and worked for many years as a recovery room nurse in the St. Michael\’s hospital in Lethbridge. Following her retirement from St Mikes, she continued as a nurse doing long term care at the Carmangay Hospital for several more years until 1995. She then began her work as a volunteer for the Bibles for Missions thrift store in Lethbridge where she helped out for many years. Ann is survived by her devoted husband of 52 years, Roger; her son Ed & Darlene (nee DeJong) Van Dellen and their children, Kaitlin, Kalisse, Jenaya, Judson, Kylan, Kienna, Kayden & Kyatt; her daughter, Sheila & Gerald Williamson and their children Laura and Kimberly. She is also survived by her brother Gus (& Betty) Teerling, sisters in law Ester & Irene Teerling as well as numerous nieces, nephews and their families. Ann was predeceased by her parents Sipko & Reina Teerling of Lethbridge, her brothers Peter Teerling of Alto Michigan and John Teerling of Surrey B.C., and her sister Winnie Modderman of Regina Saskatchewan. A Funeral Service will be held at 1:00pm on Friday, August 29, 2014 at TRINITY UNITED REFORMED CHURCH, 100-40 Ave. N., Lethbridge, Alberta, T1H 6V7, with Reverend Hank Van der Woerd, officiating. In lieu of flowers, donations can be made to the Bibles for Missions Thrift Store, 1004 1 Ave. S., Lethbridge, Alberta, T1J 0B1. Send condolences at www.mbfunerals.com.