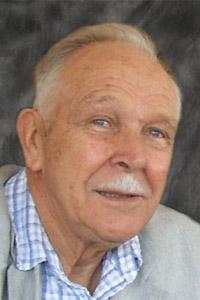 BILL \”MAC\” BROWN, beloved husband of Anne Brown, of Lethbridge, passed away at St. Michael\’s Health Centre Palliative Care Unit after a courageous battle with cancer on Tuesday, September 2, 2014 at the age of 87 years. Besides his loving wife Anne, Bill leaves behind his children; William (Hui) Brown of Esquimault, B.C., Fiona Brown (Brian Kinnee) and children Katrina and Stephanie Kinnee of Diamond City, AB and Elisabeth (David) Mayne and children Matthew and Justin Mayne of Winton, Queensland, Australia. He is also survived by his brother John Brown. Bill was predeceased by his parents and brothers George RAF 1940 and Robert. Bill was born and raised in Fife, Scotland, working and studying Horticulture before moving to Edinburgh and Birmingham to continue his studies. He married Anne in 1956 and they immigrated to Canada in 1957 where he worked for the City of Edmonton Parks from 1957 to 1961. They moved to Lethbridge where he became the Superintendant of Parks and Recreation for the city from 1961 – 1987 and retired following the completion of the Urban Parks Project, where he was responsible for establishing the framework of Lethbridge\’s renowned Urban Parks System. During his time in Lethbridge, he was a member of the Lethbridge Public School Board # 51 from 1970 to 1975. Bill was involved with the Royal Canadian Legion, the Southern Alberta Environmental Group, the Lethbridge Naturalist Society and Toastmasters International. He also held memberships with the Royal Botanic Garden Edinburgh Guild as well as with the Alberta and Canada Parks and Recreation Associations. A Funeral Service will be held at CORNERSTONE FUNERAL HOME, 2800 Mayor Magrath Drive South, Lethbridge on Friday, September 5, 2014 at 1:00 P.M. with Reverend Bob Wallace officiating. Cremation to follow.