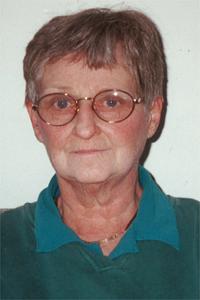 DECEMBER 24, 1937 ~ SEPTEMBER 1, 2014
Angela (Angie) Schluchter, beloved wife of Bill Schluchter, passed away peacefully on September 1, 2014 at the Chinook Regional Hospital in Lethbridge. Angie is survived by her husband Bill from Lethbridge, daughters Donna from Edmonton and Carla from Lethbridge; sisters Mona from Delta, BC, her twin Sr Marie Bitz from St. John, NB, and Gwen (Ken) Schmidt from North Vancouver, BC. She was predeceased by her parents Frank Bitz and Angelina Bitz (nee Ell) and brother Charles in infancy. Angie was born at the Grey Nuns Hospital in Regina and was raised on a farm in the Holdfast, SK area, moved to Regina in 1959. On May 1, 1965, she and Bill Schluchter were united in marriage and Regina was their home until 2008 when they moved to Lethbridge, AB. Angie courageously battled a chronic illness (Scleroderma) throughout the majority of her life. Even with these struggles she found great enjoyment in reading, spending time with family and friends and especially loved all animals. A Funeral Service will be held at 11:00am on Thursday, September 4, 2014 at MARTIN BROTHERS RIVERVIEW CHAPEL, 610 4th Street South, Lethbridge, AB with interment to follow in the Mountain View Cemetery. Donations in Angie’s memory may be made to the Scleroderma Association of Saskatchewan, 465 Willow Bay, Estevan, SK S4A 2G3 or the Lethbridge & District Humane Society, 2920 16th Avenue North, Lethbridge, AB T1H 5E9. Send condolences at www.mbfunerals.com.