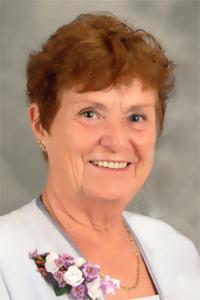 RITA COMAI BROOKS, age 81, passed away suddenly on Thursday, August 28, 2014 at Chinook Regional Hospital in Lethbridge, Alberta. Rita is survived by her sister Wilma (Andy) Valer of Lethbridge, and her four children: Clint Dee Winton Brooks (Mary), of Daytona Beach, Florida, Rory Kelvin Brooks (Ruth) of Kelowna, BC, Wendy Laine Tolley (Warren) of Stockholm, Sweden, and Gregory LeRoy Brooks of Lethbridge. She has 13 grandchildren and 18 great grandchildren. Rita was predeceased by her loving husband, Winton Earl Brooks in July 2007, whom she has sorely missed. Born in Lethbridge on July 23, 1933, Rita was the younger of two girls born to Alfredo and Olga Comai. She grew up in North Lethbridge and was very active in the Italian Canadian Community right up to her passing. Rita received her education in Lethbridge, and on March 10, 1951 she was married to Winton Brooks. She was happy as a devoted wife and mother as she partnered with her best friend Winton in raising their four children and in his teaching career in Lethbridge. Over the years they had several foster children in their home who were loved and cared for just like their own. As grandchildren arrived, they were famous for their devotion and individual attention to each of their new additions to the family. After retirement in 1983, Winton and Rita maintained an extremely active lifestyle, and spent their time involved in travelling in their motor home to visit the family that was scattered around the US and Canada. During that time they spent most of their winters being snowbirds in Arizona, where they became well known and loved in the Lake Havasu community. Rita was known by everyone she met as a warm, friendly and loving person who lit up the room when she entered. She was very outgoing and made friends very easily. Her smile and sense of humor made her the life of any gathering. She was a talented homemaker with notable abilities in cooking, baking, sewing and home decorating. She loved to collect and display beautiful things. She was active in her church as a visiting teacher and as Relief Society President and spent endless hours serving and assisting others. Friends may greet the family on Sunday, September 7 from 5:00 to 6:00 p.m. at CHRISTENSEN SALMON GENERATIONS FUNERAL HOME, 703-13 Street North, Lethbridge or prior to the funeral service on Monday from 9:30 to 10:45 a.m. at the church. Funeral Services for Rita Brooks will be held at The Church of Jesus Christ of Latter Day Saints, LETHBRIDGE EAST STAKE CENTER, 4105 Forestry Ave South, Lethbridge, on Monday, September 8 at 11:00 a.m.