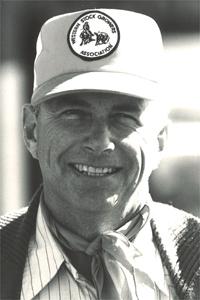 1926 ~ 2014
Sherman Ewing Jr. age 88, of Claresholm, AB passed away peacefully on September 1, 2014 of natural causes. Born July 5, 1926 in Minneapolis, MN Sherm spent his early years in Pleasantville, New York. He attended high school at the Thacher School in Ojai, CA. and riding the train across the country, he fell in love with the West. Sherm then served in the US Air Force until the end of WWII. He studied economics and agriculture at Yale and Cornell Universities. In August of 1950 he married Clarissa Clement of Buffalo, NY. Together they moved West to begin their lives in the cattle business in California and Montana, and then settled at the SN Ranch in the Porcupine Hills west of Claresholm, Alberta. This is where they raised their three kids, became stewards of the land and spent the best years of their lives. Aviation was Sherm’s passion and he used his wings for business and pleasure. He loved his family, friends and neighbors, church and volunteered for his community. Sherm played leading roles in ranching organizations such as the Western Stock Growers, The Alberta Beef Cattle Performance Assoc, The Canadian Limousin Assoc, The North American Limousin Foundation, The Stockmen’s Memorial Foundation, The Society for Range Management and helped form the Canadian Property Rights Research Institute. In his retirement in Great Falls, Montana, Sherm authored two books, The Range and The Ranch. He enjoyed freelance writing, loved tennis and golf, and he and Claire traveled extensively with friends and family. Sherm is survived by his three children, Wanina Ewing (Mike Lindsay) of Claresholm, Charlie Ewing (Sherry) of Claresholm, Leslie Kriz (Wayne) of Rimbey, AB; seven grandchildren and 3 great-granddaughters; sister Nan Bull of Stamford, CT, brothers Truxtun Morrison of Wayzata, MN, Nick Morrison of Boise, ID. He was predeceased by his loving wife Claire, sister Lucia Ewing of Hopkinton, VT, and brother Frank H. Ewing of Denver, Co; father Sherman Ewing Sr. of New York City, NY and mother Mary H. Morrison and beloved stepfather Gen. H. T. Morrison of Wayzata, MN. A Memorial Service will be held at 2pm on Wednesday, October 1, 2014 at ST. AUGUSTINE’S ANGLICAN CHURCH 411-11 St South in Lethbridge, AB. In lieu of flowers, memorial donations may be made to the Claresholm Palliative Care, PO Box 610, Claresholm, AB, T0L 0T0, or St. Augustine’s Anglican Church 411- 11 St South, Lethbridge, AB T1J 2N9, or The Stockmen’s Memorial Foundation, PO Box 459, Cochrane, AB T4C 1A7 or the Heart and Stroke Foundation of Alberta 100-119 14 ST NW, Calgary, AB T2N 1Z6. Send condolences at www.mbfunerals.com.

One Condolence for “EWING JR Sherman”