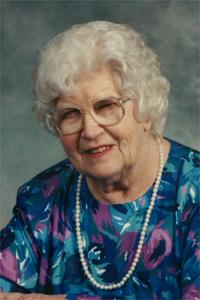 1916 ~ 2014
Our beloved mother, Barbara Irene Gaehring passed away with her family by her side on September 3, 2014 in Milk River, AB. Born in Foremost AB on April 1, 1916 to parents Jacob and Elizabeth Degenstein. She leaves to cherish in her memory Mabel Snortland, Medicine Hat, Levaren Gaehring, Milk River, Alex (Phyllis) Gaehring, Wetaskiwin, Pearl (Glen) Hacke, Calgary, Lillian (Clifford) Munsch, Piapot, Sask., Ruby (Stan) Yanke, Brooks. One sister, Katherine Casper, Grand Prairie, daughter-in-law Donna Gaehring, Calgary, and one sister in-law Marie Degenstein, Edmonton. There are also 16 grandchildren, 30 great grandchildren and 4 great-great grandchildren along with numerous nieces and nephews. She was predeceased by her husband David, one son Leroy, one grandson Jason Gaehring as well as her parents, five brothers and one sister. Barbara attended school in Foremost but also worked as much as she could to help her Mom and Dad support their large family. She was working in the Hoping district when she met David Gaehring and they married in October of 1938. They remained at Hoping where their first daughter Mabel was born. In 1942 they moved to Picture Butte and Shaughnessy were Dave worked in the coal mines. More children arrived there, with Levaren, Alex and Pearl joining the family. Barbara added to the family income by cooking for large crews of sugar beet workers. Most of the vegetables on the menu came from her own large garden. Dave’s ailing father Jacob also lived in Shaughnessy and Barbara found time to look after him as well until his passing in 1948. After laying him to rest, they moved back to Hoping to take up farming again. Back on the farm at Hoping they were blessed with three more children. Leroy, Lillian and Ruby arrived to join them, making a family of seven children and two hard working parents. Mabel pitched in at the age of twelve looking after the young ones and having suppers ready when Barbara was in the field helping Dave. The family continued to work the farm and raise all the necessary vegetables and meat required to keep them going. She raised chickens, turkeys, ducks and geese, selling many of these for additional income. Barbara was a great bread baker often baking 12 loaves 2 to 3 times per week. Times were hard then but they also found time to visit with friends and relatives and partake in many an active card game. In 1956 they finally got electricity at the farm. What a huge leap forward. Just think of what all took place in her lifetime. From horses to their first tractor and a pickup; from wood heat to oil heat and then to natural gas; from coal oil lamps to electricity, battery radio to television and now the internet; from wood stove to gas and electric, then to a microwave; from root-cellar to ice box to deepfreeze; from your own home remedies and neighbor doctoring to 911 instant help. In 1971 they sold the farm and moved into Milk River where she resided in her home until moving into the Prairie Rose Lodge in March of this year. She enjoyed every minute of the lodge experience. A Funeral Service will be held at 11:00 am on Monday, September 8, 2014 at ST. PETER’S CATHOLIC CHURCH, 321 Main Street North, Milk River, AB with Father Dominic Nguyen, celebrating. In lieu of flowers, memorial donations may be made to Prairie Rose Lodge, 117 3 Ave NW, Milk River, AB T0K 1M0. Send condolences at www.mbfunerals.com.

One Condolence for “GAEHRING Barbara”