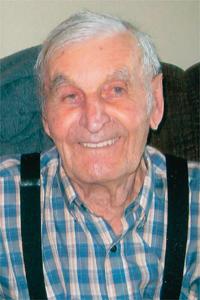 (Feb. 4,1929 — Aug. 31, 2014)
Born — Josefstal, Ukraine
Died — Calgary, Alberta
It’s with great sadness we announce that Fred passed away peacefully at the Beverly Centre Lake Midnapore in Calgary this past Sunday at age 85. Fred, like many of his family and friends, began his life in the peasant town of Josefstal in the Ukraine. After surviving the bombardment of their town by both the German Wermacht and then the Red Army, Fred and his family found themselves refugees who had to make their way through war-torn Eastern Europe to Germany. After living a number of years in Germany, Fred crossed the Atlantic Ocean in a rust ship and arrived in Southern Alberta to begin a new life, having to learn a new language and the ways of North America. Fred, and his wife Frieda, also a refugee from Josefstal, married in 1953 and raised their family of three sons in the town of Coaldale. They provided a wonderful childhood and Fred passed on to his sons the attributes of responsibility as a husband, father and grandfather. Fred spent almost 50 years in Coaldale, but reluctantly gave up his home in 2012 when he could no longer look after it, moving to the Heartland residence in Okotoks for 1 1/2 years and then to the Beverly Centre for several months before he passed away. He left this life after successfully providing for his family and becoming a valuable contributor to Canadian society. He leaves us, having earned the respect of friends and colleagues and with the love and gratitude of his family. Our prayers are that he is now watering his tomatoes and getting ready to have the lunch that Frieda prepared for him. He is predeceased by his wife, Frieda; father, Gotlieb; mother, Jacobina; brothers: Wilhelm, Alex and John. Left to remember him are his sisters (Anna — Calgary), (Lena — Germany) sons, daughters-in-law, grandchildren and great-grandchildren: (Ernest/ Katherine: Dieter/Erin/Vera; Claire/Andrew; Olivia/Nate), (Ewald/Myra: Jaice/Rachelle/Carter/Kinley; Cale/Kristin; Drew/Breanne), (Leonard/ Diane: Alida; Matthew/Tara). A special note of thanks goes to the staff members of the Heartland Residence and Beverly Centre for the kindness and care with which they treated Fred and all of us who visited there. You really are a gift to all families in this situation. A viewing and opportunity to pay respects will be held between 7 — 8 p.m. on Sunday evening, September 7, at CHRISTENSEN SALMON GENERATIONS FUNERAL HOME (703-13 Street North, Lethbridge). The funeral service will take place at REDEEMER LUTHERAN CHURCH in Coaldale (2006 20th St) at 1 p.m. on Monday, September 8. A private family interment will follow at a later date.