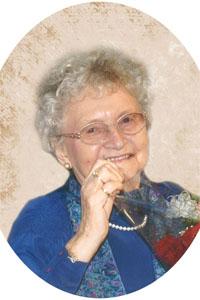 ANNE HOVELING, beloved wife of George Hoveling of Lethbridge, passed away at St. Michael’s Palliative Care on Tuesday, September 2, 2014 at the age of 86 years. She is survived by her three children: Yvonne (Ron) Pasco of Jaffray, B.C., Michael Hoveling of Weston Priory, Vermont and Mark (Ingrid) Hoveling of Lethbridge, AB, as well as her five grandchildren, Katherine (Kevin) Larsen of Calgary, Paul (Tara) Pasco of Calgary, Tonya (Braydin) Brosseau of Calgary, Alyssa Hoveling and Ben Hoveling of Lethbridge and her three great grandchildren Finnigan Pasco, Killian Pasco and Clara Larsen. Anne is also survived by one brother Jack (Lucille) Schavemaker of Calgary and four sisters, and their families in Holland. She is also survived by her special nieces and nephews Marcel (Christine) Hoveling of Elkford, B.C. and Leonne (Duncan) MacDonald of Cranbrook, B.C. Anne will also be lovingly remembered by the Benedictine Brothers of the Weston Priory & many, many friends. Anne was predeceased by a sister Bridgette and a brother Ton. Anne was born May 3, 1928 in Amsterdam. She was educated as a seamstress before marrying George. Together with their three year old daughter they immigrated to Foremost, AB. After moving to Lethbridge, Anne continued her career as a seamstress at The Primrose Shop. Her faith was important to her, as she was an associate member of the Sisters of St. Martha\’s. She enjoyed singing in the choir and volunteered many hours at St. Michael\’s Health Centre in the gift shop & spending time with seniors. Anne enjoyed the outdoors & sitting on her patio was a favorite. Anne\’s strong will helped her at all times and was a source of pride for her family. She was a loving wife, mother, and grandmother who will be sadly missed. Relatives and friends are invited to a Prayer Service at CORNERSTONE FUNERAL HOME – 2800 Mayor Magrath Drive South, Lethbridge, on Friday, September 5th, 2014 at 5:00 P.M. A Funeral Mass will be celebrated at OUR LADY OF THE ASSUMPTION CATHOLIC CHURCH – 2405 12th Avenue South, Lethbridge, Alberta on Saturday, September 6th, 2014 at 10:00 A.M. with Father Kevin Tumback celebrating. Cremation to follow with burial in Weston Priory, Vermont, USA. In lieu of flowers, memorial donations may be made in Anne\’s memory to the St. Michael\’s Health Centre, Palliative Care Unit, 1400 – 9th Avenue South, Lethbridge, Alberta, T1J 4V5.