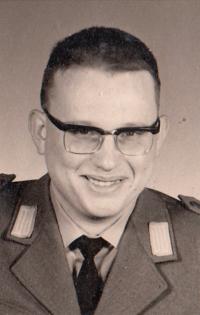 INGO (BILL) FRIEBE, beloved husband of Eugenia of Lethbridge, passed away surrounded by his family on Saturday, September 13, 2014. He is the loving father of Thomas Friebe of Lethbridge, Monica (Jeremy) Posteraro of Edmonton and their children, Haley and Hannah. He was predeceased by his mother, Gerda Gundt and his father, Erich Friebe. Bill was born in Stendal, Germany. He proudly served in the German Army for 2 years. Later, Bill also served with the Canadian Armed Forces, providing over 20 years of service. He was employed at IPSCO Canada in Edmonton for 25 years, and was later self-employed. Bill enjoyed travelling, going to the shooting range, spending time with his granddaughters, RVing, swimming, going to the movies, and reading. A Memorial Mass will be celebrated at ST. MARTHA’S CATHOLIC CHURCH, 355 Columbia Blvd. West, Lethbridge at 3:00 p.m. on Saturday, September 20, 2014 with Fr. Salvador Ahumada, presiding. Interment took place at Mountain View Cemetery, Lethbridge in the Veterans Field of Honour. At Bill’s request, memorial donations may be made to St. Michael’s Health Centre, 1400-9 Ave. South, Lethbridge, AB T1J 4V5.