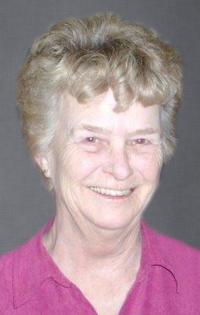 GWEN M. TONDU beloved wife of the late Terry Tondu, of Granum, passed away at the Taber Health Centre on Wednesday, September 17th, 2014 at the age of 72 years. She is survived by her 4 children: Robert Tondu of Edmonton, Gwendoline (Darcy) Marsden of Taber, Teresa Tondu (Mark Holzwarth) of Lethbridge and Dixie Tondu of Taber. Gwen is also survived by her 4 grandchildren: Trevor & Bradley Marsden of Taber, Elizabeth Gaucher of Lethbridge and Tyson Holzwarth of Lethbridge. She is also survived by her 3 siblings: Bonnie Brill, Beatrice Walter and Joseph (Anne) Crawford, as well as numerous nieces, nephews and cousins. Besides her loving husband Terry, Gwen was predeceased by her parents Joseph & Gwendoline Crawford and 2 brothers Graham & Duncan. Gwen was born September 25th, 1941 in Mannville, AB. She continued her education in the Air Force in Quebec. Gwen returned to Alberta working various jobs. Gwen & Terry married, raising 4 children and finally settled in Granum after spending time in Wainwright and numerous other towns. Gwen was a fun loving and caring person who was sometimes known as outspoken. A Funeral Service will be held at CORNERSTONE FUNERAL HOME – 2800 Mayor Magrath Drive South, Lethbridge, Alberta on Monday, September 22nd, 2014 at 10:00 A.M. with Reverend Aldeen McKay officiating. Interment to take place in the Granum Cemetery. In memory of Gwen, donations may be made in lieu of flowers to the Canadian Cancer Society, 317 10 St S, Lethbridge, AB T1J 2M7.