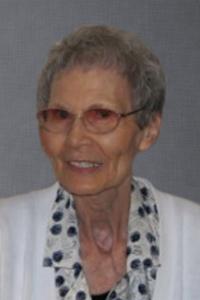 HELEN MAY MIDDLETON, beloved wife of the late Robert Middleton, passed away in Lethbridge on Wednesday, September 17th, 2014 at the age of 90 years. Helen will be dearly missed by her 4 children: Catherine Pishton (Leonard Preas) of Port Coquitlam, B.C., Dawn Middleton (Dave Kulyk) of Calgary, Dr. Cameron Middleton of Lethbridge and Blair (Hazel) Middleton of London, Ontario. She is also survived by 5 grandchildren: Vincent, Alana and Jordanna Pishton; Emily and Gillian Middleton; and her sister Aileen Shiells. Helen was predeceased by her best friend and husband Robert (Bob) Middleton in 2007; daughter Roberta Lea in 1958, her sister June Ens in 2010, and her parents Earl and Alice. Helen was born in Prince Albert, Saskatchewan on March 25, 1924. After the Second World War, Helen worked for the Canada Unemployment Insurance Commission where she met her future husband. Helen married Robert on September 20th, 1950 in Saskatoon, Saskatchewan. In 1958 employment brought Bob to Lethbridge, and this is where Helen focused on raising her \’family first\’. In memory of Helen, a memorial donation may be made to the Heart and Stroke Foundation, #207 – 542 7th St. S., Lethbridge, AB, T1J 2H1 or to the Arthritis Society (Lethbridge). A Graveside Service will be held at Mountain View Cemetery, Lethbridge on Monday, September 22nd at 11:00 A.M. (meet at main gate by 10:55 A.M.).

One Condolence for “MIDDLETON Helen”